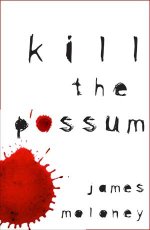 ‘Kill the possum’ is a novel that, in Moloney’s own words, is “not for the fainthearted”.  It is a hard-hitting realistic novel that deals with some tough issues: sexual and emotional abuse, violence and revenge.  Moloney is an author that has in the past looked at relationship difficulties in families, such as parental desertion in ‘A Bridge to Wiseman’s Cove’, cultural and racial prejudice in the ‘Dougy’ trilogy and family breakdown in ‘Lost Property’.

However, this novel is the most confronting of all his novels as it deals with family violence and the hard moral questions that arise from this.  Three teenagers are the main protagonists of ‘Kill the possum’: Dylan, whose father left when he was very young, and Kirsty and Tim, who have an abusive father.

Dylan has always liked Kirsty, a girl from his school, from afar.  He gets up his courage at the beginning of the story to go round and visit her at her home.  Unfortunately, he walks into a shocking situation and witnesses the abuse by Kirsty’s father first hand.  Kirsty’s father is on his fortnightly access visit, and he always takes the opportunity to emotionally abuse and intimidate his wife and two older children.  Though this time he does no physical violence, the emotional scars are just as damaging.

Tim, as a young teenage boy, is much smaller and slighter than his Dad, and feels intimidated, and helpless to protect his sister and mother.  These things cause Tim to stutter, binge drink, self harm and truant from school.  At the same time, a ball of hatred and anger is building up inside him, threatening to break out in violence.  Kirsty deals with the abuse by compartmentalising and pushing the bad feelings aside, allowing her to attempt to live a “normal” happy life with her friends at school.  Their mum collapses emotionally, taking to her bed and leaving Kirsty to run the house and family.

Dylan walks into all of this and immediately feels drawn in to their nightmare world.  He feels responsible to help them, especially when he learns the justice system won’t.  He develops a close but separate relationship with Kirsty and Tim.  Dylan and Tim begin to plan to murder Tim’s father, Cartwright.  Dylan feels this is the only thing to do before Tim or his Mum attempt suicide.

The title of the book, ‘Kill the possum’ comes into play when Dylan and Tim practice on a possum they have caught in their roof.  If they can bring themselves to kill the possum, maybe they will have the courage to kill Cartwright.  A shocking scene of violence unfolds when they attempt this.

The book moves swiftly to an extremely confronting conclusion and raises moral questions such as: ‘Is the killing of one person to save others justified in some circumstances?’ and, ‘Is it right to lie in court to protect others?’

Moloney has written a very important book in ‘Kill the possum’.  The characters are portrayed insightfully and the scenes of violence and abuse are frighteningly vivid and uncomfortable.  It will be appreciated by young adults who enjoy realistic fiction, but it will also be useful for all the moral issues it raises for discussion.  It is highly recommended. – Jane Crew