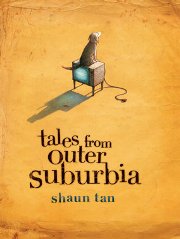 ‘Tales from Outer Suburbia’ is a loose collection of short stories, illustrated and written by Shaun Tan.  The stories are all inspired by life in the suburbs, but have many different themes and styles, and the illustrations are also a conglomeration of styles.  Shaun Tan himself has commented that “an ensemble of different stories can also evoke a single collective concept, something greater than the sum of its parts”.  What seems to bind these stories together is a combination of childlike innocence with adult wisdom and experience.

Shaun Tan says that he was inspired by his experience of being a child growing up in the suburbs, and the world of a child’s imagination.  Each story in this book is imbued with an appealing childlike feeling, often mysterious and hard to pin down.  Overlaid on this are political and environmental issues, dealt with in unexpected ways.

The book begins with the one page story ‘The Water Buffalo’, inspired by the mystery always evoked by a vacant block in the suburbs.  The buffalo is an enigmatic figure with a strange ability to be omniscient.  The drawing is marvellously appealing with the buffalo standing on hind legs, pointing with a tiny hoof.

One of the most appealing and humorous stories is ‘Eric’, about an exchange student that comes to stay.  The problem the family have dealing with Eric is common to all families who have someone unfamiliar with their own language staying with them.  Is your exchange student happy?  Are they enjoying your house?  Do they like the food?  The family don’t know the answers to these questions until Eric goes, leaving behind him a selection of exquisite little presents that commemorate things they did for him.  Added to the pleasures of this story is the fact that Eric is a tiny little person a few inches tall in the shape of an autumn leaf with legs.  There are lots of whimsical little jokes in the illustrations, such as seeing Eric sitting in the car seat belt.

Other stories deal with political issues, such as ‘Alert but not alarmed’, which has a new approach to terrorism in the suburbs; ‘Wake’, dealing with cruelty to animals; and globalisation is looked at in ‘Our Expedition’.  Some of these stories are playful and whimsical; others more serious.  This is reflected in the illustrations which accompany them.  ‘Grandpa’s story’ depicts a bleak wasteland to reflect the hard times he went through.  In ‘No Other Country’, the illustrations are designed to look like a Renaissance fresco or religious painting to reflect the European background of the immigrant families in the story.

Finally, one of the great pleasures of this book is to be found in the endpapers and contents pages.  The end papers are a conglomeration of the little doodles and sketches which Shaun Tan made over the years, many characteristic of his preoccupations and interests.  The contents page is a delight: made up of postage stamps to show the chapter names and page numbers.  The acknowledgements page at the end has an old-fashioned date-due slip and pocket, which brings back many memories to older readers.

‘Tales from Outer Suburbia’ is a book that rewards close study, as it full of hidden delights and depths of imagination.  It will appeal to readers of all ages.  It is highly recommended. – Jane Crew