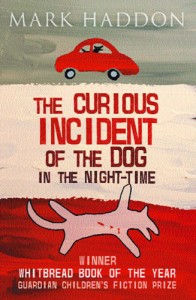 “All the other children at my school are stupid. Except I’m not meant to call them stupid, even though that is what they are. I’m meant to say that they have learning difficulties or that they have special needs. But that is stupid because everyone has learning difficulties because learning to speak French or understanding Relativity is difficult, and also everyone has special needs, like Father who has to carry a little packet of artificial sweetening tablets around with him to put into his coffee to stop him getting fat, or Mrs Peters who wears a beige coloured hearing aid, or Siobhan who has glasses…”

Christopher Boone doesn’t behave like most of the kids at his school – and this often causes him strife and trouble. He  usually says exactly what he is thinking, and sees things in a rather black and white manner, with little room for emotion or pretence. He can’t understand the way many people behave, and why his honesty often causes him, and others around him, grief.

On the positive side of things, Christopher is a bit of a maths whizz and enjoys working out puzzles – though puzzling why a neighbourhood dog is brutually killed gets him into lots of strife. He decides he is going to solve this murder mystery and keeps track of things as he writes a story about his discoveries. Difficulties come about when he can’t understand ‘normal’ social cues, and the idea of telling a white lie or avoiding issues to protect others is beyond his comprehension. this is especially serious when the police become involved and secrets from the past are revealed.

As the above quote suggests, there is really nothing wrong with his thought processes, except for how they fit into society’s way of thinking. ‘The Curious Incident…’ is an interesting insight into how many autistic people view the world, as it is written from Chris’ point of view, as it reflects how he views normal daily interactions which we often intepret quite differently.

It is food for thought for teachers and students as we learn to accept the differences between ourselves and those around us. The struggles Christopher has dealing with relationships, adolescence and school are often magnified by his autism, but Haddon’s tale  is intriguing as he reveals the many complexities involved, while providing an insight to how others could empathise better with those who are different – since “everyone has special needs.”

Recommended to anyone with an interest in thinking about how others tick… And isn’t that you and I?

Robison, John Elder. 2007. Look me in the eye: My life with Apserger’s. North Sydney. Random House