This question is raised once again as fans of John Marsden anticipate the release of ‘Tomorrow When the War Began’ as a movie – September 2 in Australia. Movie trailers have been appearing on YouTube for some time, and with updates and extra details on the film being added all the time, excitement is building in dedicated fans. 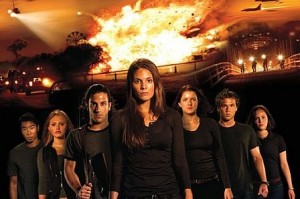 Filming began in September last year, and it happened in locations around the Hunter Valley and the Blue Mountains, to reflect the countryside of the novel. Isolation and wilderness provide the setting in which Ellie and her friends struggle to deal with their total separation from friends and family when invaders take over.

An interesting difference between this film release, and those of recent popular book series like ‘Harry Potter’ and ‘Twilight’, is the time that has lapsed since the book was first published – in 1993. Will this mean a deeper fan base interested in seeing the film, or a more critical examination of whether the movie is true to the book, because readers have longer to know it? Will different generations of Marsden fans flock to the movies? Or will it encourage a new generation interested in reading the series? (Let’s hope so.)

Already, John Marsden has commented on some of the differences between his book and the movie, as he was not directly involved in film production; though he is quite happy with the final product. (You can view his comments here, later to avoid spoilers before seeing the movie; see if you agree with the author.)

So, if the author is happy with the adaptation, should we the readers accept it as well? What are the acceptable ways in which a movie might differ from its book source? What things might it be inappropriate to do when creating an adaptation? In which order do you prefer to experience a book/movie combination?

Latest news: John Marsden made more comments on his involvement (or lack of involvement) with the film in an article this weekend – see Write of passage in the Sydney Morning Herald, August 20, to read what he thought of the film-to-movie process.

## In the book-vs movie debate, you might also like to check out: Book to Movie? to see how much do you know about book-to-movie adaptations. (From the ‘Inside a Dog’ website.)