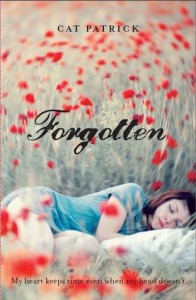 Imagine waking up every day and having no memory of what happened the day before!  What about the idea of having to write yourself notes at the end of the night to make sure you know what to wear, what to take to school, what you are expected to be doing the following day? How would you feel if time passed by, and if you didn’t even remember the daily routines that helped you get through the things that others take for granted?

Does this sound a bit like the movie ’50 First Dates’? Well, you need to expand on this idea a bit, and add into it a character, London Lane, who is also able to ‘remember’ the future – a gift she is unsure of, and a gift her friend, Jamie, is keen she keeps to herself. Jamie does not want to be told about the outcome of her flirtation with a school teacher; nor will she heed the warnings of London, who naturally doesn’t want her friend to get hurt.

However, London is happy to know that, according to her future memory, Jamie will remain her friend in the years to come. She is not happy that she is not be able to ‘see’ and therefore, ‘remember’ the flat-out gorgeous guy who keeps turning up in her study periods at school. Since she doesn’t ‘remember’ Luke from the future, she thinks something must happen to him to wipe him from her life.

The lack of a memory is an interesting concept, and how it might impact on your life would be something for all to consider as you read through the troubles London faces – many of which teens might identify with, even without a memory problem! And many would love to have to have a supportive parent like London’s mum (in spite of her own struggles) and a very understanding, new boyfriend, like Luke. The seeming lack of awareness shown by her teachers is perhaps shown from London’s point of view, as there are no major consequences of her memory loss, and coping with daily class tasks doesn’t seem to be a problem; matters which don’t really surface too much.

This aside, ‘Forgotten’ is a compelling read, and author Cat Patrick has you guessing what may lie ahead. What could be the possible consequences for the things London forgets, her attempts to change the future, and her pursuit of her family history? With many twists and turns, you may never guess… And it will have you thinking long after the final chapter.

For more about American author, Cat Patrick and what inspired the writing of this,  her debut novel see: http://www.catpatrick.com/about/

People are already asking for a sequel! What do you think?

2 thoughts on “Past – Forgotten”