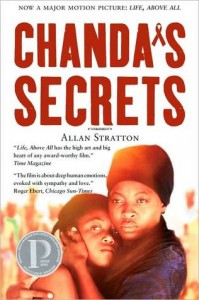 I have recently been looking into audiobooks through some of the free options offered by the Sync community for Young Adults. Through this option, I have been able to trial both contemporary and classic novels suitable for teenagers.

One of several books I have downloaded and enjoyed recently is ‘Chanda’s Secrets’, written by Allan Stratton. It is a tale that follows a young African girl facing the challenges and impacts of AIDS, both in her family and community.

It begins with Chanda, as a 16 year old, organizing a funeral for her baby sister. Her mother (Lillian) is grief-stricken, unable to cope with Sarah’s death, and her sister’s father is incapacitated (or drunk, or both). This is one of the many things Chanda has to deal with, as we slowly begin to understand how life is for the poor underclass in the shanty towns of many African countries.

As the eldest surviving sister, she  cares for her both her mother and her young siblings, Iris (6) and Soly (3) who fail to understand that Sarah is dead – mamma hasn’t told them. Life for Chanda has involved a number of father figures – her mother moving from one abusive relationship to another. And, in that, there have been big consequences for Chanda.

Life is hard. Her best friend, Esther seems to be taking the easy way out – ‘befriending tourists’ while putting herself in dangerous situations – an occasional bruise or cut being testament to that. But Esther is an orphan with a different perspective to Chanda, which Chanda both questions and almost accepts – unlike many others in the small community of Bonang.

Routines for many families in Chanda’s world include funeral and burial activities. Indeed, Chanda regularly visits the graves of her father and brothers at the local cemetery, and that of her neighbour, Mrs. Tafa’s, first husband . Unfortunately, it’s all just part of life. Also part of life is the unwillingness of the community to put a name to the sickness that is claiming many of its people. However, they are quite happy to shun any family members with a hint of that curse.

‘Chanda’s Secrets’ is all about family loyalty, pride, love and caring. In the end, Chanda feels ‘ashamed of being ashamed’. Her mother travels back to Tiro, where Chanda was born, and where her extended family still lived. But when Chanda goes to find her mother to bring her back to Iris and Soly, she learns even more about how harsh the world can be.

To hear the story told, rather than read, from Chanda’s perspective gave me time to think and see things from her point of view. Clever presentation also helped to provide different voices for each of the other characters in the story, and to bring the story alive. It still could have been helpful to have a physical book to check now and then, even if only to check how words, like places and names, were spelt, and to provide an idea of how far into the story the reading had gone. However, the whole audiobook experience was an enjoyable one for this particular book. (And previously, for Kirin Desai’s ‘Inheritance of Loss’).

Some books, but not all, will lend themselves well to the audibook experience – which books would you like to ‘read’ in this way? Are there any you don’t think would work?

## Chanda’s Secrets has been made into a movie, titled ‘Life, Above All’… See the ‘offcial'(sic) trailer below. It is also followed by a sequel by Allan Stratton called ‘Chanda’s War’ – reviewed by ReadPlus here.