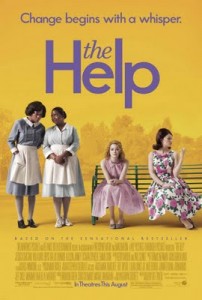 Eugenie Skeeter, however, takes up the challenge and invites others to find the courage to tell the tales of life during the civil rights movement – importantly, from the points of view of ‘coloured’ house maids. As a dissatisfied writer, she yearns to do something meaningful with her life – which is devoid of any real friends in Jackson. Returning home from college, she provides her mother with angst (with no husband-propects on the horizon), but as a keen observer, she now sees relationships at home with new eyes – ‘where black maids raise white children, but aren’t trusted not to steal the silver’.

When she finally convinces maids Aibileen and Minny to begin telling the tales of their lives as second class citizens, a momentum builds. At the same time, tension and conflict rear their ugly racist heads, as social climbers in the community work to maintain the status quo – and to keep the downtrodden in their place.

Eugenie’s friendship with two black maids is dangerous; writing a book about their experiences even more so. The outcome and whether the whole exercise is worthwhile, considering the potential harm for all those involved, creates a constant tension throughout the story, and the risks are great for all those involved.

The voices Stockett has created are immensely believable, and full of humanity. As each character (Aibileen, Minny and Miss Skeeter) tells her story, the frustrations and pressures for each of them is real and considered. Little by little, their lives are painted before us, and the impact of the prejudices of small town gossip and traditions make our hearts ache for those involved.

We feel for little Mae Mobley whose (white) mother neglects her, leaving her in the care of her maid, Aibileen. We fear that Minny will be again moved out of a much-needed job, if past employer Miss Hilly finds out where she is – that is, if Minny’s husband, Leroy, doesn’t beat her senseless before then. And then, there is the constant worry that Miss Skeeter’s writing activities will be uncovered and demonised by Miss Hilly, the young socialite, who wants to keep the blacks in their rightful positions for her view of society.

Stockett has created a strong believable story, with courageous women in a time of trouble and strife – a modern day ‘To Kill a Mockingbird’ scenario – blacks guilty before being tried, dealing with trashy white attitudes – people demanding respect from family staus rather than any true accomplishemnts in life. Though ‘The Help’ has now been made into a movie, I resisted seeing the movie before reading the book, which absorbed me fully into the lives of 3 brave women at a historic period in America. having ‘heard’ their voices, I can now look forward to what has been a well received adaptation of the book:

“The Help” is a delicious peppery stew of home-cooked, 1960s Southern-style racism that serves up a soulful dish of what ails us and what heals us. Laughter, which is ladled on thick as gravy, proves to be the secret ingredient — turning what should be a feel-bad movie about those troubled times into a heart-warming surprise. – Los Angeles Times, August 10, 2011.

Check out one of the many film trailers here –