Smoky Mountain. Piles of trash. Kids as young as 3, sifting through rubbish, to retrieve anything of value. Life, as it is for many poor children from developing countries around the world, is grimly portrayed in Andy Mulligan’s tale, Trash.

The story is told from varying perspectives, dependent on whose point of view is most valuable at the particular stage of the story. There’s Raphael, a dumpsite boy who scours the trash to help support his extended family, since he lives with his aunt’s family and, of course, cousin Gardo. He is fairly street smart, with good survival skills, but not as confident as Gardo.

Gardo is Raphael’s best friend, and outwardly much bolder, though far more serious. They share everything, so of course, Raphael has tell Gardo of his discovery at the dumpsite. When the police come questioning the dumpsite kids about whether they had found anything unusual, they both know something sinister is afoot, and they seek help among their own.

Rat (or Jun-Jun) is their unlikely hero. Younger than both boys, he is infinitely more streetwise, and incredibly adept at detecting dangerous situations – as he moves effortlessly and invisibly about the slums of Behala.

Banded together with the discovery of the small leather bag in which the police are obsessively interested, they become engaged in an adventure of mystery, intrigue and danger. But together they are determined to right past wrongs and overcome some of the elements which rule their miserable existence in the slums. 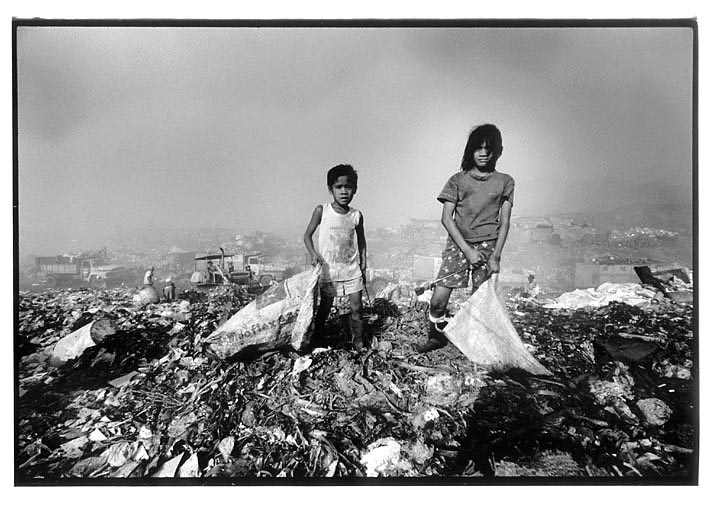 Andy Mulligan has worked as a teacher in a school near the dumpsite in Manila, and has thus experienced the sounds, smells and squallor of the nearby slums, and reflected these in his book, Trash. At no time in the novel is it specified that it is set in Manila, however, and as he has pointed out, there are many such squallid locations found around the world. And in these dumpsites, there are thousands of children living the life portrayed in ‘Trash’ – collecting rubbish to survive in poverty.

Thus in this adventure, the reader has to struggle with the knowledge that though this a fictitious tale, it is based in what is a reality for many young children around the globe, through no fault of their own. Their daily struggles and how they cope is far removed from our own existence, told as it is through the eyes of young yet resilient children, simply after a better life.

As food for thought, it may also have great impact in the form of a movie, (which is meant to happen) and would be great reading for any young teen searching for challenge and adventure. For now here’s the book trailer… or listen to the author speak here.

One thought on “Another worldview: Trash”