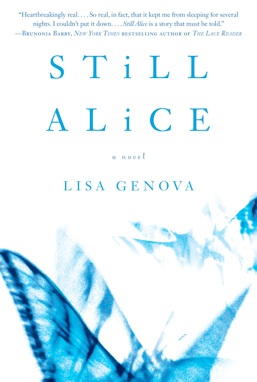 ‘Still Alice’ was a book I stumbled on at the airport, after I quickly returned another book ‘Little Bee’ since I had already read it under another title, ‘On the Other Hand’. (Another review, another time?) So it wasn’t my first choice, but it turned out to be a great choice – though I finished it far too soon, as you often do with a good book. I had wondered about whether I would enjoy the read, dealing with early on-set Alzheimer’s disease, but I found it a captivating tale.

It is told from the point of view of Alice, a well-renowned psychology professor, who begins to find increasing memory losses creeping into her well-ordered life. For someone viewed as a world expert in her field of linguistics, the tragedy of losing basic words in conversations and lectures, and even forgetting to be at lectures, is immense.

At first, Alice refuses to consider that the changes she is experiencing are anything but a temporary symptom of her busy lifestyle. So she remains quiet and ignores many telltale signs of deterioration; which also remain invisible to her busy family as they come and go. Finally, her inability to make sense of the series of lists she creates for herself, and an increasing inability to keep track of things in family conversations, force her to consult medical advice.

Lisa Genova has written a thought-provoking account of what it could be like to feel yourself slipping away from reality. While in the beginning there is clarity in Alice’s thoughts and actions, as time goes on, it becomes clear that what she ‘remembers’ is often far from what actually was happening to her.

There is a sensitive portrayal of the confusion and frustrations that can be experienced, as Alzheimer’s takes its toll on both the sufferer and their family members. Because of the way it it told, the story gives the reader true experiences of the confusion that Alice has to deal with. It also demonstrates the way in which some family members may be too close, day-to-day, to notice the subtle deterioration in the sufferer, except in hindsight.

‘Still Alice’ has received a lot of praise from reviewers, some of which have had personal experience with dementia within their families. It is written as though you were inside the mind of Alice, as the disease takes hold and changes everything for Alice and her family. Endorsement by the National Alzheimer’s Association is high praise for Genova’s writing, and a continuing blog on Alzheimer’s by the author further endorses the quality and authenticiity of this tale, and the mastery with which it has been written.

Listen to Lisa Genova discuss the beginnings of her first novel, inspired by her grandmother’s onset of Alzheimer’s, and the importance for her to tell this tale.

As a neuroscientist-turned-novelist, Lisa Genova has opened a door for us to view these changes, and perhaps, to help us to understand some of those around us – parents, grandparents, friends or neighbours, who may be affected. Thus, even though it would be considered an adult novel, I wouldn’t hestitate about recommending to younger readers who might need some understanding about people known to them fighting the disease.