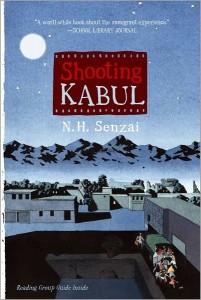 There’s a lot to be learnt from putting oneself in someone else’s shoes. Immersed in a book, you can experience many different situations, and, depending on how it’s told, you can learn lots about different cultures, lifestyles and perspectives – and ‘Shooting Kabul’ is such a story.

Fadi’s family lived in America while his father, Habib, completed his PhD in Agriculture. Returning to Afghanistan, Habib’s dreams of improving things for his country’s farmers failed, as the Taliban imposed harsh rules and restrictions. Under threats from this ruling regime, the family finally takes action to flee from an increasingly difficult situation, before their life is torn apart.

The struggles they face include losing track of Fadi’s younger sister during their escape; an event which haunts him continually. Family support in America eases the transition into his new life; but as a refugee, there are issues for Fadi, which are heightened when the events of 9/11 unfold.

‘Shooting Kabul’ is told in an easy fashion, though the story is not easy to contemplate. Since it is based on the author’s husband’s  own experience of fleeing Soviet-controlled Afghanistan in 1979, there is a lot the reader can take from the story about what life is like for many refugee families.

Throughout the story, Fadi remains guilt-laden for not adequately looking after his younger sister. Thankfully, there are supportive and understanding people in his new life – when he decides to share his burden. His display of determination and youthful hope tug at your heart strings, as he endeavours to make plans to return to search for his lost sister. How his plans unfold, and what he learns of himself and others, fill out the pages with an interesting insight of hope, love and perserverance.

A realistic introduction for yrs 6-9 to the immigrant experience and refugee life.