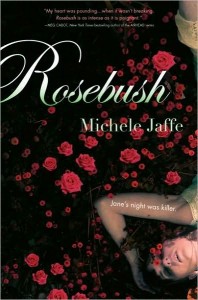 The image with which ‘Rosebush’ opens is both poetic and dark. A young girl lies broken and motionless, tangled in the clutches of a thorny rosebush. Is she alive? Her eyes are open and glazed, sightless.

For all accounts, she is dead. But not so – since the voice of this tale belongs to her. So begins the recount of the events and relationships which brought her to this day, as she slowly recovers in hospital.

In hospital, Jane has plenty of time to wonder, trying to remember what happened the night  of the party and her strange accident. Her memories are hazy, and don’t seem to fit with some of the things her friends are explaining to her.

Her hospital room is filled with lots of ‘Get Well’ wishes; including some strange and somewhat threatening ones from a secret admirer. Jane begins to develop a sense of paranoia, thinking someone is still trying to kill her. Family, friends and hospital staff try to explain this away, as either  a reaction to recovering from a major accident or the effect of drugs she has been given. But is that all it is?

‘Rosebush’ is a bit of a mystery/thriller, set on the Jersey Shore. Thus, many of the main characters are cast as spoiled, wealthy wannabes, with little regard for how they impact on the lives of others. Jane has decided to try on this type of persona when she moves to the area. She reinvents herself, and is accepted into the cool group at her new school, becoming one of the ‘three musketeers’. As she tries to recall the events leading up to her accident, she also does some evaluation of her ‘friendships’, spending a lot of time observing others as she slowly recovers.

Did she, as the police suggested attempt suicide? Or was someone out to get her? Why? Is she now just going mad? Or does she need to save herself before the killer finishes her off?

Have you ever tried to be someone else to fit in with others? How can you tell when people are being real with you? What is true friendship?