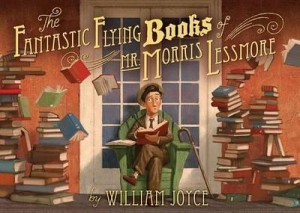 Some time last year, I downloaded from iTunes the movie, The Fantastic Flying Books of Mr. Morris Lessmore – a short movie which soon after won an academy award for Best Animated Short Film. It left me entranced as I viewed it on my iPad, with echoes of the Wizard of Oz as it began to play.

Since then, the tale has captured the hearts of many booklovers. It tells the story of a young man, Morris Lessmore, who gives his life to building up the promotion of books and reading.

The movie uses different creative techniques, such as including scenes reminiscent of old black and white movies and then colouring people’s lives when they delve into books, either reading or writing them. Passing on the love of reading to future generations is also alluded to when, at the end of the movie, Morris’s book passes on to a young girl who appears on the scene after he leaves.

In a funny twist, the book form of the The Fantastic Flying Books of Mr. Morris Lessmore has only just been released. However, the tale behind its creation is as interesting as the tale itself.

Joyce has been working on it since 1999, with several major interruptions (including Hurricane Katrina and personal health issues). This is a book that really needs to read from cover to cover, including the back fly-leaf, which gives more detail about his writing journey. It is interesting to note:

The idea for the book preceded the film, but The Fantastic Flying Books of Mr. Morris Lessmore has only just been released in book form this year. But it was well worth the wait! The book and film make great companions!

Here’s a link to the movie trailer: