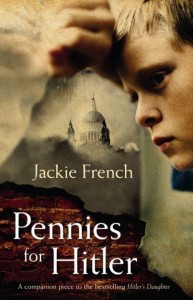 For Georg, life in Germany is just fine – with 2 loving parents and a settled homelife. As an 11 year old, he believes all that his teacher, Herr Doktor Schöner, tells him about Adolf Hitler and the differences between races – even if his (English) father’s views were not quite as adoring.

Things change rapidly when there is a demonstration at a university graduation ceremony that his family attends – an uprising against Jews, and his professor father is caught in the crossfire. Georg and his mother flee the scene, and he is literally ‘packed off’ to live with an English relative, without knowing his father’s fate.

Since his grandmother has Jewish blood, Georg’s mother fears for his safety. In England, of course, it is his German heritage that could put him at great risk, so for a long time he has little to do with anyone other that his aunt and the local librarian.

Life is lonely for Georg, who must now be known as George.  To try to develop an English accent, he spends time reading and listening to the radio. His aunt is kept busy, spending long days away from the apartment supporting the war effort. In fact, life is not normal for many in London, as the war makes food scarce and, for their own safety, many children are sent to the countryside. When the bombing of London increases, his aunt’s workplace also has to be relocated, but Georg cannot go with her.

Once again he is packed off – this time on a ship to Australia to live with a foster family. For a while, he develops new friendships with other children on the journey, responsible as an older child for several others. Soon he finds that these friendships are to be taken away by the relocation exercise, and wonders if he will ever be able to maintain any family ties or friendships.

Sadly, many of Georg’s experiences were very real (and worse) for children who grew up in the war years.

Jackie French has again provided a story that is both well-researched and realistic. Using Georg’s perspective in changing situations, she makes us ponder how men define and create enemies, and how the truth can be manipulated by propaganda. It also helps us think about the many impacts of war on families, and how we decide who we love and hate.

Through it all, Georg is unsure of whether his parents are still alive. Hiding his German/Jewish heritage becomes crucial, as he settles in several different situations. Will he finally with a loving foster family in Australia, find happiness within himself and among the country community?

For a sneak preview of the book, here’s a link to the first chapter.