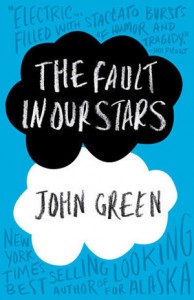 “I went to Support Group for the same reason that I’d allowed nurses with a mere eighteen months of graduation to poison me with exotically named chemicals: I wanted to make my parents happy. There is only one thing in this world shittier than biting it from cancer when you’re sixteen, and that’s having a kid who bites it from cancer.”

Obviously, Hazel doesn’t think much of her Support Group. But as an only child and the concentrated focus of her parents’ life since her cancer diagnosis, she succumbs to their wishes. What else can she do? Her illness has meant that she no longer attends school regularly, she has to sleep a lot, while her mother tries to encourage her to have a normal life. How normal can it really be when you know you have a terminal illness?

This is not a ‘happy-ending’ story. Very often in real life children and families fighting cancer do not have a happy ending. This is not a book to make you feel good, or to tell you how to be when someone you know experiences the illnesses associated with cancer. But it will make you think.

This fan-made book trailer gives some insight into the thoughts within ‘The Fault in Our Stars’ – a story of what happens when teen cancer patients fall in love.

In an interview, author John Green makes the statement:

“It’s important to note or remember that people who are sick and people who are dying aren’t dead. They’re still alive. And sometimes we forget that, and we treat the sick and the dying so gingerly and so carefully, when often what they most want is to be alive while they are alive.” ‘Star’-Crossed: When Teens With Cancer Fall In Love

That is why he wanted his book to be realistic, and not a sugar-coated tale ready for Hollywood to take to film. The kids in ‘The Fault in Our Stars’ want to live and make their mark on the world.

What sort of impression have they made on you, the reader?