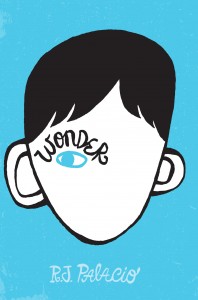 After many years of home schooling, August Pullman is facing his first year at school. Like any new student, he is not sure what to expect and how he will fit in. His parents are unsure whether it is the right time for him to start school – they have protected him from the cruelty of the outside world up until now. All of them have been to the school before it starts in order to prepare him for this next step in his life, and buddies have been set up to help out.

The trouble is, August will stand out, due to a facial deformity he was born with. In spite of many operations, he has faced many years of taunts and stares from strangers, and he now faces exposure to a much bigger group of people on a daily basis. Students who don’t ven know him will judge him harshly, call him names and some, even bully him.

The story is told from a number of different points of view – that of August; his sister, Olivia; her boyfriend, Justin; and a school friend, Jack. This helps to show the struggles of people who care for August, along with the joys they have of knowing the boy behind the face. August’s thoughts and reactions in the story are the ones that really make you think.

Problems of fitting in, and the bullying associated with being different in a new situation, are among the issues to be dealt with in ‘Wonder’. The impact on others around Auggie is also one of the key elements of the story. His sister, school mates and others all reflect their position in his life – what they see and how they act to the way others treat Auggie.

Though ‘Wonder’ is probably written for a younger age group (set in grade 5, and with an 11 year old protagonist), there is great value in older students reading this tale. With the different perspectives shared, and the simple way which August expresses his point of view, there are lots of things to wonder about. Do we treat others fairly? Do we too often judge others based on their appearance? How many people are handicapped, not by their own physical disabilities, but instead by the way others label them?

For some, the ending will be wrapped up too warmly – the years of staring and laughing that August has faced being swept under the carpet. However, some of the precepts in the final ‘Appendix’ chapter are worth dwelling on. And if a book like ‘Wonder’ can make people think about life from a different perspective, then that makes it a worthwhile tale to recommend!

For an insight to what inspired the author to write ‘Wonder’, her debut novel, see: http://www.telegraph.co.uk/culture/books/authorinterviews/9086974/Interview-with-RJ-Palacio-author-of-Wonder.html