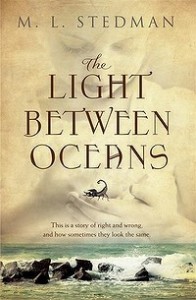 What would you do if a baby washed up in a boat, accompanied only by her dead father? Would you wonder what had happened to her mother? And if you lived on a remote island housing a vital lighthouse, how would you go about reporting the lost (and found) baby?

Add another complication – you are a young couple who have faced the loss of several babies before they had time to even be; the last being stillborn just a few weeks previously. Is the baby perhaps a gift from God? Why was she alone in the boat with a dead father? Perhaps her mother had also perished?

Tom and Isabel live a solitary life as lighthouse keepers. Together they decide on a path which is always destined for sorrow and trouble. By the time they have their regular visits to and from the mainland, Lucy has well and truly become part of their life. Isabel’s parents, who live in on the mainland welcome their only grand-daughter with open arms, convinced of course that she really is their flesh and blood. And Lucy delights all who see her. How can they change the course of action they have slipped into by caring for baby Lucy?

This is an amazing debut novel for M.L. Stedman – told with gentleness and mystery. It succeeds in getting you to change your point of view, depending on whose story you are reading at the tim, without making you feel you have deserted one of the other characters. There are many different perspectives from which they can all be judged, as Stedman reveals the inner workings of each person in the tragic turn of events.

And as a reader you can sympathise with each one: Tom the solitary returned soldier; his wife, Isabel grieving several miscarriages; Isabel’s parents who have lost their sons to war; and of course, Hannah, who has lost both a husband and a child.

Though set in a fictional coastal community, the Light Between Oceans represents what life might have been like for those performing essential duties along our coastlines in times gone by.

As the author states: “The plot of THE LIGHT BETWEEN OCEANS isn’t based on personal experience, other than to the extent that it’s set in Western Australia, where I’m from, so the landscape and weather hopefully have an authentic feel” ( comments from a GoodReads forum about her book). The setting describes the isolation of this part of Australia (and the lighthouse even more so), heightened even further by its post war time period. The tale reflects things which might occur in relationships when life doesn’t always give people what they want.

The impacts of war, isolation and loss are some of the key issues Stedman weaves into this tale of several tales, and the reader is left guessing, never quite sure of the final outcome. While the pace of the story has been criticised by some, it really just echoes the way things would have been before communications were so instant, and gives the reader time to consider how different things might have been in the past.

Movie options have been discussed, and the book has recently won the Indie Awards for a Debut novel. For more about M.L.Stedman see: http://www.smh.com.au/entertainment/books/interview-ml-stedman-20120322-1vkty.html

What did you think of the book?