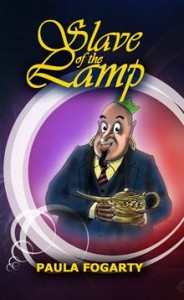 Authors come from many diverse walks of life – and not all of them write their first book straight out of school as many would like to think:

So it is not surprising to discover that another debut author, Paula Fogarty, has ‘real’ job as a doctor – that she has worked in travel medicine for many years, and has a Post Graduate Masters degree in Tropical Medicine and Public Health.

It is also not surprising that Paula’s tale involves a magical genie and heroes of mythology, when you read that “her youth was spent devouring huge volumes of ancient Greek, Arabic and Nordic mythology.” In ‘Slave of the Lamp’, she uses her own interpretation of old tales, combined with adventure, for a young boy who simply wants to earn some money during his holiday break.

In this tale, genies (or ‘apprentice’ djinns, as Rufus might be called) are not all powerful and fearful. Neither do the old-school heroes like Aladdin measure up to our expectations. Instead, for example, Aladdin is a fat, deceitful and lazy son, who uses the djinns, Rufus and Gloria, to carry treasure from a magical cave for his, and only his, greedy pleasures. As a djinn, Rufus does not have the magical powers he first associated with the job he agrees to do, but he simply has to use his own cunning and ability to get by.

As with any tale involving a magical lamp, the fates and fortunes of the djinns within are determined by changing ownership of the lamp. So Rufus and Gloria’s journeys vary through different times and countries. Treasure hunting is a very risky business, which is why they are employed along the way in the endeavours for riches and power by others in charge of the lamp. However, there is the chance that the powers of human ingenuity, even in the shape of a naive 13 year old boy, may triumph.

Fogarty’s travels and exposure to exotic cultures, along with her passion for ancient mythology have surfaced well in this book. You can smell the different locations Rufus faces, you can feel the new situations he has to adapt to, and you cheer his knowledge of the many  diverse lands he comes across. His powers of observation and the decisions he makes are also admirable. Teen readers will love him.

‘Slave of the Lamp’ is a fun book, to be followed by many more in a series – one which will reveal many more of the wonderful places Paula Fogarty has visited. Whether they are real or imaginary locations remains to be seen – whatever the case, there are bound to be many more adventures in store for Rufus as he substitutes as ‘Slave of the Lamp’.