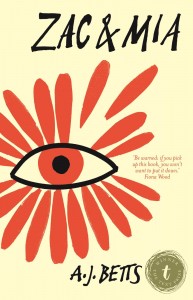 Zac is condemned – to spend an insufferable number of days, confined to a room, in the cheerful company of his mother. Not that he hates his mother’s presence – he just hates that she feels she has to be here. Or that he has to be here. But that’s what the medical system recommends. For treatment of his disease. And Zac accepts this.

Mia, on the other hand, resists. In the room next to Zac’s, she shouts, argues with her mother, and plays Lady Gaga on repeat, repeat, repeat.

Confined to his room, Zac wonders about the girl next door. Why is she so angry? Why does she argue with her mother? Why doesn’t she realise that the odds of her survival are so much higher than others on the ward? He knows all this – he has spent plenty of time googling for that kind of statistic. And her stats are good…

A.J.Betts  spent quite some time with kids in hospital. That fact is obvious. Her story is woven with mundane but realistic facts about living and dying with cancer. Without being boring, she tells of the ‘day-to-day’ experienced by families impacted by serious childhood illness, and the different ways they might cope.

Some have compared ‘Zac and Mia’ to ‘the Fault in Our Stars’. Some reviewers have criticized it as a copy, but having been written around the same time in a different continent it simply relates a similar focus – of young people dealing with cancer.

Having read and enjoyed both, and investigated the timing etc. needed to publish a book, I would say to the reader just ENJOY BOTH stories, since they have unique qualities to share. Zac and Mia do not go through the same therapy programs (as Hazel and Augustus). Zac and Mia finally meet after talking on Facebook and through hospital walls! Under different circumstances, their paths may never have crossed.

Strangely, the differences in their lives is what draws them together. The support Zac has in his family and friends is sadly lacking, for much of the story, for Mia. Their sameness is the struggle they face with a potentially lethal disease.

Zac and Mia is a thoughtful story, filled with astute observations and discreet comments from an author who has spent time on a hospital ward, supporting young adults in dire times. There is lots to absorb and think about – especially for those trying to understand some of the struggles faced by teen cancer patients.

In weeks to come, there will be a list of other books for those who have enjoyed  both ‘the Fault on Our Stars’ and ‘Zac and Mia’.

For those who can’t wait, there is another book worth reading – This Star Won’t Go Out’ by Esther Earl. This is a real life journey, said to have inspired John Green’s story, ‘the Fault on Our Stars’ – this video introduces Esther’s book. (Comments here from John Green and Esther’s sisters.)

That there are a number of books with a focus on young adults with life threatening illnesses at the moment is probably more a reflection of the openness of the medical profession, and more education from the media, than duplication or copying of an idea. What do you think?