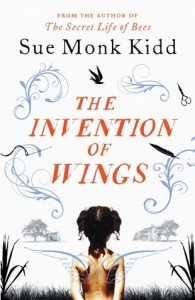 I hereby certify that on this day, 26 November 1803, in the city of Charleston, in the state of California, I set free from slavery, Hetty Grimke, and bestow this certificate of manumission upon her.

So begins Sarah Grimke’s attempts to free her personal slave, Handful – a gift from her parents on her eleventh birthday. As the middle daughter of a wealthy and prominent family in Charleston in the American Deep South in the 1800’s, she struggles to act in the way society expects of her. Sarah is unable to turn a blind eye to the brutal treatment of slaves – both those in her household and in society at large.

From an early age, witnessing the harsh treatment/punishments meted out (to keep the slaves in line) has a massive impact on Sarah. A troublesome stutter, which she struggles with at times of angst, in fact has its roots in a vicious flogging she viewed. The reality and pain of this urged Sarah on to fight for the abolition of slavery, but also provided a stumbling block to her ambitions – that, and the fact that she was a girl in a male-dominated society. Though she is known as ‘the daughter her mother calls difficult and her father calls remarkable’, there is nothing remarkable planned for her future.

The Invention of Wings is also told from the perspective of Hetty, otherwise known as Handful. Through Handful, the daily struggles of a slave are told, along with the coping mechanisms they use to survive. Handful’s mother, Charlotte, tries to weave hope into their pitiful existence, as she tells her about her family and their traditions – aiming to foster pride and courage in her daughter. As a talented seamstress, Charlotte is also clever in  teaching Handful valuable life skills and worthy talents to make life a little easier.

The story is actually founded on actual historical figures, Sarah and Angelina Grimke, American abolitionists, and members of the women’s suffrage movement. Much of the detail about Sarah is based in fact, while Handful’s story comes from research into slave narratives and personal childhood experiences of Sue Monk Kidd with African American voice.

Both Sarah and Handful ache for wings to free them from the fetters of their lives – one captured by slavery, the other with the sentence of being female at a time when women had few rights. While Sarah’s key purpose  is to promote the abolition of slavery,  and fulfilling a promise to Charlotte to try to free Handful, her own ‘slavery’ as a female also gives rise to the fight for women’s rights (which was also the case in history).

The Invention of Wings follows the success of The Secret Life of Bees, and would also make a great movie.

To get an insight into the writing process, there are several interviews with Monk Kidd online – including one hosted on her own website. It is a really interesting read, as she talks about the characters coming alive on the page over the 3 1/2 year writing period!

# I ‘read’ this book as an audiobook, which provided a great cast of voices also – though as usual I still needed the actual book when I became impatient to see the words on the page.