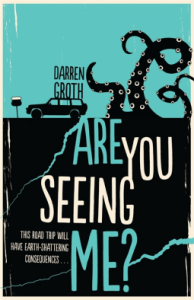 Twins think and act alike, right? Even fraternal twins do many things the same, right?

Yes, to some degree. I can speak from personal experience of fraternal twins who would often pick the same birthday cards for relatives, and scheme together against the other siblings in the family – often in their own personalised language.

However, as many twins (both identical and fraternal) scream – they are still individuals! The twins in ‘Are You Seeing Me?’ are certainly individuals – both of whom scream for different reasons…

Perry screams when his world gets out of hand. At times when he is faced by the unfamiliar, “Perry has trouble with people – mixing with them and communicating with them – and it sometimes results in inappropriate behaviours.”

This is the spiel that Perry’s sister regularly rolls out to explain her twin brother’s unusual behaviour. As his twin, she is determined to protect him from the judgemental gaze of others. When Justine screams, however, Perry isn’t the cause – it’s the interfering concern of others, like her boyfriend, Marc.

In ‘Are You Seeing Me?’ much of the journey for Perry and Justine takes place as they travel to Canada, to seek out their estranged mother, Leonie. She left the twins in their father’s care when they were 4, unable to cope with twins – especially since Perry has a ‘special needs’ tag. Unfortunately, in their nineteenth year, Perry and Justine are left alone as their doting father dies of cancer.

There is also an emotional journey for them as they attempt to re-establish links with Leonie – and she has much to learn about Perry. A chance for her to re-connect.

I love the characters Darren Groth has created. They are authentic and believable. The communication between Justine and her father occurs through a diary he kept from birth, and it provides her strength, understanding and support as she strives to support her brother as he tenuously begins to negotiate the adult world. Perry’s comments and insights provide a ‘look inside’ as he struggles to find independence and ‘free’ his sister of her twin commitment.

Finding out that Groth’s own twins were the inspiration behind this book cements the authenticity and appeal of this book. While it has been aligned to Mark Haddon’s ‘Curious Incident of the Dog in the Night-Time’, it tells a completely different tale. The relationship of twins shows how the Autism Spectrum Disorder impacts the whole family – and how they adapt and deal with it.

Groth proudly speaks of this in ‘A Dad’s Gift to his Neurotypical Daughter’, which is a very interesting prelude to the novel.

Groth’s tale is funny, informative and optimistic. The bond between Pez and Just Jeans is so lovable, it is a great tale for teens to enjoy.

N.B. I am also looking forward to reading ‘Kindling’, an earlier book by Darren Groth – which also deals with autism.