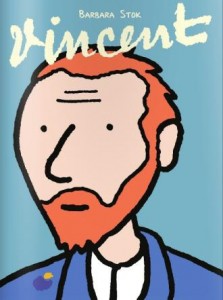 Van Gogh’s struggles, inspirations and family support are revealed as Barbara focuses on the ‘brief and intense period of time that the painter spent in the south of France.’

In simple ways, ‘Vincent’ also brings to life the way in which artists of the time influenced, and were influenced by Van Gogh, such as Paul Gaugin.

The idea of artist colonies/houses /communities springs up, as does the need for many talented artists to be sponsored by someone – in Vincent’s case, by his dedicated brother, Theo. The good times and the bad are pictured, as Stok reveals the character of Van Gogh, his ‘pursuit’ and ‘purpose’ of painting, and his artistic intensity and drive.

Fans of Van Gogh will recognise the natural elements which inspired the artist at this time – haystacks, starry nights, sunflowers. Within this time, however, there are also periods of mental illness, including when he cuts off his own ear. Ultimately even though family support comes through, Van Gogh’s tortured existence continues.

In many ways, Van Gogh’s art both drives him, and demonises him. The ability to paint sees him through many tough times, but the need to paint also divorces him from many aspects of normal life.

Reading ‘Vincent’ makes you ponder the life of an artist – and offers a little understanding of the life of Van Gogh; the difficulties he faced, the sacrifices and the troubled existence of an infamous Dutch artist and his colleagues.

N.B. I am not an art student, and found this an interesting reflection of an artist introduced to me by a teacher in year 3!