As always,  over the summer break in Australia, there is a flurry of movies released to the cinemas. At the same time, there is often a hive of activity to publish (or re-publish with a movie-jacket), the associated books. This summer was no exception – though this activity included at least 2 books which were written from the movie – Paper Planes and the Water Diviner. 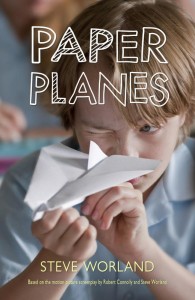 The magic of what happens in Paper Planes is well suited to a movie format. The struggles of Dylan with his father’s depressed state, alongside bullying issues at school and further afield, are clearly recognisable in the early stages of the movie.

Scenes shot in slow motion capture the drama of what is happening and of course background music enhances the flights taken. Particularly engaging is the scene where Dylan’s grandfather fires up his imagination with a flight in a vintage plane in an Aviation museum. It certainly captured the imagination of the 6 year-old I took to see it.

The book itself lacks a bit of depth – I didn’t feel the same anticipation of what was to happen, nor imagine as vividly the action taking place. The addition of photos from the movie, within the book, and instructions for making paper planes at the end, were a bonus – and certainly inspired my 6 year old companion before we saw the movie. From the photos and the movie trailer we had seen previously, he could already identify some of the themes and characters – “He’s the bully… She does lots of backflips and somersaults… He gets pushed down the stairs.”

Certainly the story has value with great themes of resilience, friendship and the value of imagination- whether consumed as a book or a movie.* (Further review to come.) 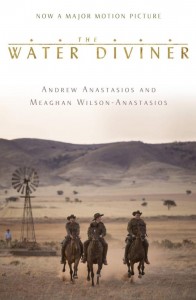 On the other hand, having just finished the Water Diviner, I am really keen to now see the movie. Andrew and Meaghan Anastasios have developed rich characters and locations in the Water Diviner, and help you see both sides of the story of our historical Anzac tragedy.

You can truly imagine the rough-tough-but-sensitive Connor in his quest to find out the fate of his three sons. Details about the battle fields, life after war in the invaded country and reflections on family life from differing cultural perspectives develop throughout the story.

Thus, the Water Diviner provides the perspective of loss from point of view of the Turkish people. Contrasts and similarities abound in this tale, there is much to ponder about the impact of war.  (Further review to come.)

Anyone who has read this blog before would know that I am an advocate for read-the-book-then see-the-movie. And my bias is often towards the richness of what the book has to offer over the movie. However, I have also agreed in the past with comments from authors who point to the fact that we can appreciate both mediums equally – that it is often unfair to judge them on their differences:

I can only respect what a screenwriter has to do when trimming a sizeable novel to a 120-page script.

I feel like when you give someone a creative job, you can’t say, “Right, be creative, but do it how I want you to do it.”

Source: Marcus Zusak – How I Let Go of the Book Thief,http://www.smh.com.au/entertainment/movies/markus-zusak-how-i-let-go-of-the-book-thief-20140102-306he.html

[On the other hand] Readers [bring a] box of effects and nuances to colour in the spaces left by the writer [of a book].

In film, the magic tends to be woven on the surface. The viewer is treated to another’s dream. In literature, the reader does the dreaming. And that, for me, remains the greatest magic of all.

Source: The Weight of Expectations for Lloyd Jones,http://www.smh.com.au/entertainment/movies/the-weight-of-expectations-for-lloyd-jones-20131031-2whz8.html

So now it is over to you to judge – which way are you going to find a story? Will you always “read the book, then see the movie”? or does a movie sometimes inspire you to go back to discover the delicacies and intricacies of the book?

* I do have one alteration that I would make to Paper Planes, and that is that I would at least infer that he had adult company to and within Japan – perhaps with Maureen?