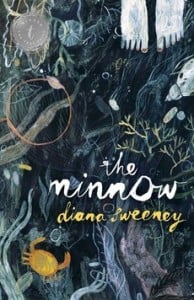 The Minnow, by Diana Sweeney, tells of a young girl’s difficult journey of growth through early adolescence into a new way of being.

Our storyteller, Tom (Holly), is orphaned at the age of fourteen when her parents and sibling (Sarah) are killed during a flood which affects many residents of a small lakeside town.  Tom’s ability to both perceive, and also speak to, family members who have died is at first somewhat confusing to the reader. But the most poignant introduction occurs with the voice of “the minnow”. When Tom survives the flood and takes up residence with Bill, a family friend, her first sexual encounter is the result of his abuse. Although she escapes his daily influence, moving in with close friend Jonah, Tom becomes aware that the child she carries (the minnow) will connect her to Bill and his predatory behaviour. And, although she has adult friends who would help her, Tom remains silent.

In the character of Tom (Holly), Diana Sweeney’s first novel sensitively conveys how difficult it is to report sexual predation. Tom’s fear must first be acknowledged and she must be sure of a safe passage for herself, and for her child (the minnow). Sweeney also exposes a dislocation, imaged by the flood event, whereby Tom’s life experiences separate her from school friends and the normal priorities of adolescence. This isolation is evident within the absences that Sweeney embeds in her narration. Tom’s voice consistently grounds the novel in the viewpoint of a fourteen year old and avoids adult perspectives. Even as water imagery infuses the telling and is accompanied by the voices of underwater creatures, the reader must rely on this perspective to link events with consequences. Ultimately Tom accepts her new life as Holly, and her child (the minnow) emerges to a life and voice of her own.

Although Sweeney tells of an adolescence that is experienced through loss and predation, Holly’s emergence unfolds with grace: a deep sense of renewed hope, a capacity to trust, and a connection with life’s possibilities convey images of survival that remain in the mind of the reader long after turning the last page.

# Note: this is one of the shortlisted books in this year’s CBCA Young Adult section.