I thought of Micky – there was nothing useless or dirty or stupid about him. He was funny and worked hard. He was smart too. Actually he was just, well, normal. And that man on the television, Charles Perkins, spoke better than half of Walgaree. 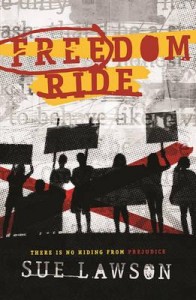 This quote comes from Sue Lawson’s book, Freedom Ride; a fictional tale tied into the real events of the 1965 Freedom Rides which occurred in NSW. (Their aim was to draw attention to the poor state of Aboriginal health, education and housing.)

In Lawson’s book, we are introduced to Robbie – a teenager in a fictional (but representative) country town in NSW. Through Robbie’s eyes, we quietly see the subtle segregation that was ‘accepted’ in Australian history. Naturally, Robbie’s youthful views are his family’s views, but these are slowly adjusted as he critically observes the practices and beliefs of different adults around him.

With little previous exposure to the plight of Aborigines in his community, Robbie only begins to question community values when a holiday job sees him working side-by-side with Micky.

Historic events litter the tale, setting it in a real time and place in Australia. For a brief history about the time in which it is based, see BTN Freedom Ride

Was this how things really were in country towns in the 60’s? Some would argue this was not the case. But Sue Lawson has taken a pocket of humanity to illustrate the racist attitudes which promoted the Freedom Ride movement. Many who lived in similar locations would agrue that these emotions were not rampant in their mind’s eye – but for those suffering racist taunts and restrictions, it would have felt this way.

An interesting tale to put young adults in another person’s place and time in history.