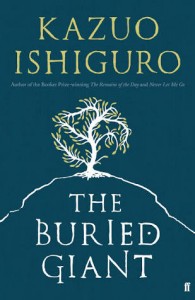 Axl and his wife Beatrice cannot understand why they can no longer have a candle in the darkness of their modest home at the edge of their village warren – but that is what had been decided. Struggling also with the taunts of unruly, undisciplined children and the vagueness overcoming other villagers, they decide to embark on a journey to see their son.

Even though, for an elderly couple, such a journey looms as an ominous unknown venture, they feel compelled to attempt it  – and so Ishiguro weaves a veil of intrigue over their travels, and they move amongst differing villages and cultural contexts.

Others they meet along the way include warriors out for revenge, misguided monks upholding tradition and rituals, outcastes of various types, and a brave, though elderly, knight – all with passions of their own, and ideals conflicting with one another.

The world Ishiguro has created has mystical elements, including a mist of forgetfulness, dragons, pixies and ogres. Within this, human spirit battles historical conflicts, myths of the past and present, and that ‘which-may-be-remembered-but-probably-shouldn’t’.

A powerful mist has robbed many of their memories – both good and bad – and Axl and Beatrice had seen evidence of this occurring more and more before they left on their journey. They too, strugged to recall much of their past, but in their hearts they sought to find their son, and so their journey begins.

‘The Buried Giant’ recalls parts of history – the conflict between the Saxons and the Britons, but talks of a time of forgetting when they live peacefully side by side. Niggling memories are what haunt those like Axl and Beatrice, Master Wistan and Sir Gawain, and suspicion and cultural beliefs hunt young Edwin from his native home.

Their fragmented journey together, where loyalties are tested time and again, make for a challenging tale of love, life and destiny. Yet another well crafted tale from Master Ishiguro, including a beautiful portrayal of love and marriage.

For a bit of a taster, listen to this audio excerpt. This is definitely a great book for an audio version – I really enjoyed hearing the different voices, so well expressed by David Horovitch.