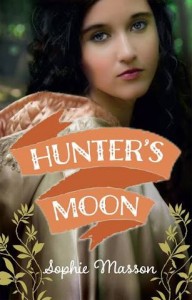 If you are expecting a retelling of Snow White from Sophie Masson’s ‘Hunters’ Moon’, then you will be disappointed.Though it refers to the ‘Fairest Lady’ and deals with a step-mother plotting her step-daughter’s downfall, it is far more than ‘Snow White and the Seven Dwarves’.

The tale of Snow White explodes in Masson’s tale. It is full and detailed; with characters new and real; with familiarity and clever modern twists that make it her own.

Bianca is not a helpless Snow White waiting for a prince to rescue her, but an observant, resourceful young woman, ready to take action and seek out the truth behind her father’s demise.

The world Masson has created is alive with characters, alliances and mysteries that Bianca must sort through. At first, she is blessed with rescue in the Haven after her stepmother’s servant, Drago fails to kill her. Unlike Snow White, however, she plans to overcome her alluring stepmother’s plans to win over the adoring community, to help them see through her pretentious facade.

‘Hunter’s Moon’ weaves fantasy, fairy tales and traditions with a little bit of magic and steam punk (automata) to bring about a challenging tale. You can never be sure who is hanging around in the shadows – friend or foe.

This is the challenge Bianca faces throughout the tale – who can she trust? Who can she rely on? How can she expose Belladonna for who she really is? Does she have the strength to do it herself? Who is on her side in the end?

A fantastic twist on a traditional tale – another great novel from the prolific Sophie Masson.

One thought on “Fairest of them all…”