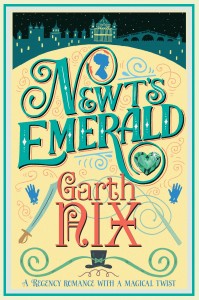 Sometimes, authors have an idea for a book which takes a while to complete.

Garth Nix’ book Newt’s Emerald is an example of this – beginning its life (well, the first lines) 23 years before it was published! In a note at the back of the book, Nix talks about the first version of this book “which remains in a bottom drawer and there it will stay.” Thus, Newt’s Emerald represents the re-working of a past tale from Nix’ creative mind.

Within the story there is a mix of fantasy, love story and historical fiction, as Lady Truthful seeks to recapture an enchanted emerald stolen from her ailing father. To do so, she uses her own enchantments (along with those of her aunt), to follow a dangerous journey while disguised as a man.

Woven into the mix is her proposed introduction to society, as a young lady from a well-to-do family, turning eighteen.  Thus, Truthful switches between the roles of a well-bred young lady and a gentleman, known as Chevalier de Vienne (her own French cousin). Will she be detected?

Truthful herself, is a mix of personalities – able to act as a lady, but at the same time able to parry with the male cousins with whom she has grown up. These influences come into play as the story moves into dangerous situations, as Truthful calls upon both her instinct and undeveloped magical powers to recover the Newington Emerald.

Add into this, an evil sorceress, people who are not always who they say there are, and you have situations which can twist and turn as the pages turn.

Newt’s Emerald – ‘a regency romance with a magical twist’. Shortlisted in the CBCA Older Reader’s  category this year.

Will it pull off a magical award? Will it enchant Garth Nix fans? Will the mix of fantasy, romance and historical fiction bewitch young readers?

Perhaps Garth Nix describing his book might invite you into the tale?