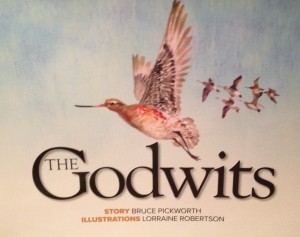 While this blog is mainly dedicated to reviewing Young Adult fiction, after attending the book launch of ‘the Godwits’ recently, I knew I had to write about it.

This is a tale that connects two worlds – and shows how they impact on one another, in spite of great distances and differing perspectives.

In one place, Gao Wei, the young son of Gao Da and Gao Shu, celebrates his birthday on the shores of the Yellow Sea in China; his new binoculars in hand. Many thousands of kilometres away, Gowie, a migratory bird also celebrates a birthday, as he awaits a momentous occasion.

Wei is passionate about birds, in much the same way as author Bruce Pickworth describes his own long-term passion for writing. Wei’s passion moves him to oppose a development which his father, Da, is meant to support in his work, and the battle begins. (Bruce’s has finally produced a picture book!)

In the other ‘world’, Gowie personifies the life of a Bar-tailed Godwit – an amazing bird which annually migrates between Australia/New Zealand and Alaska, via mainland China. We learn about the instincts these birds need to call upon, and the behaviour of the flock and who controls it. We are reminded that the power of the individual is not determined by size, but by attitude and relationships, when it comes to achieving leadership. 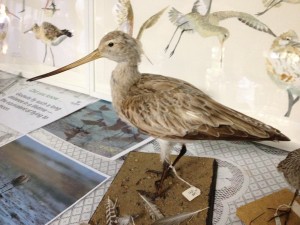 As the tale develops, page by page, events in Wei’s life sit alongside those of Gowie; as each becomes stronger, and better acknowledged by others.

Dr Meredith Burgmann, who launched ‘the Godwits’, reminisced her own battles against developments threatening the environment. She also identified with many other aspects the book touches on like freedom of speech, feminist issues and family relationships. And then she wondered if it was time again for her to protest – in front of a grader about to start a demolition like Wei does in the story!

Author, Bruce Pickworth has combined a life-long passion for writing with a family interest in bird-watching, adventuring and natural discoveries. The result is a delightful tale which both entertains and informs, as Wei and Gowie overcome struggles put before them. Illustrator, Lorraine Robertson, provides gloriously detailed scenes to contrast the two worlds (as well as informing the astonishing fact pages). Authentic support from Birdlife Australia and their own personal histories bring Bruce and Lorraine together in achieving a wonderful project.

Once the story itself is finished, it is complemented by pages of amazing facts about Godwits, and actions that have been taken to ensure their migration path remain accessible  as the industrial world encroaches on these sites.

Here is another book to join those like Jeannie Baker’s ‘Circle’ to both entertain and inform our younger readers – and stun and amaze older readers, by presenting great visuals, and an appealing story for important environmental issues we must all consider. (It may be interesting to use them as comparative texts?)

* Copies of the book and teachers notes are available from Bullawai Books. The trade and school distributor is INT BOOKS – intbooks.online

3 thoughts on “Launching ‘the Godwits’”