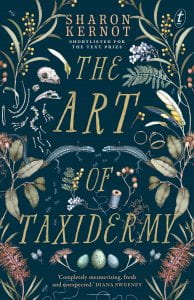 What do you know about dead things? How do they make you feel?

Charlotte (Lottie) seems oddly fixated on dead creatures – collecting them from her local neighbourhood in the hope of preserving them. Her interest extends to anything at school which alludes to preserving life, such as the embalming rituals of the Egyptian culture. Is there a reason for this?

Her Aunt Hilda (who cares for her, and her father, since the death of her mother) struggles to cope with Lottie’s obsession, calling it crazy and unhealthy. Thus she constantly tries to block Lottie’s collection and preservation attempts.

In his own grief, Lottie’s father also struggles. However, as a scientist, he supports her investigations – and encourages her scientific curiosity and interest in taxidermy.

In “The Art of Taxidermy”, death, grief and emotions are both raw and beautiful. Mix in a few elements from the past (an immigrant history) and cultural conflicts of the time (mid 60’s?) and you can understand the turmoil Charlotte/Lottie and her family experience.

As a verse novel, the reading flows easily. (If you haven’t tried a verse novel before, this is a good one to choose.) Australian readers will lap up the vivid and concise descriptions of all that Charlotte finds beautiful – dead or alive e.g.:

The corellas were grazing
with a scatter of galahs.
We sat on a fallen log
and watched them squabble and tussle,
beat their wings and waddle
like hook-nosed old men
with their arms tucked
behind their backs.

What some might struggle with is her fascination with ‘dead things’. But then, that may be the key to understanding the issues of dealing with premature death – from sickness, accidents and war – to intentionally make you uncomfortable. Through all these things, Sharon Kernot explores how we might feel in this wonderful, but heartbreaking verse novel. Don’t hesitate – read it – available from your school library – and in ebook version from other sources too!!

Have you read a verse novel in the past? Did you like it?

Don’t you love Kernot’s descriptions of the Australian countryside? Which part is your favourite?

Why do you think Aunt Hilda is so much against Lottie’s ”obsession”? Is it the right choice?

Note: this book is shortlisted for CBCA honours this year. Will it be a worthy winner?