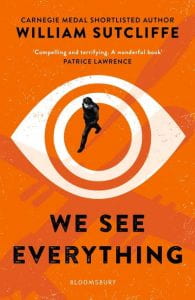 Two young men. Two families. Living in the chaotic, dysfunctional city that was once London. What hopes and aspirations can they have?

In We See Everything, we experience the pangs of youth – needing acceptance, understanding and love. As Lex and Alan move about in different circles of life, they both look for these things – from their family or their work. But in some ways their lives are in-sync.

Though they will never meet, Alan has a perception of Lex’s life, lived on the edge on the Strip – “the overcrowded, bombed-shell of London.” He views Lex’s comings and goings incidentally, while surveilling the movements of Lex’s Dad, #K622 (through his work as a drone pilot).

Lex is aware of the surveillance drones which buzz the city streets, but seems to have become accepting of them, and tries his hand at testing the limits of his freedom – just to feel alive. Growing older, he begins to sense his father keeps secrets from him; but getting older, he takes on the challenges (duties?) his father begins to place before him. Will he meet these challenges? And what could the consequences be if he doesn’t?

We See Everything, told from 2 different points of view, is a thriller which will have you guessing, feeling the angst of the players, and considering the possibilities for those involved. Some twists and turns make it a thought-provoking read as you ponder the impact of technology and its role in depersonalising the tasks people are sometimes called on to perform.

Both Lex and Alan seek love and attention from their family. What conflicts exist? Do you feel they are resolved in the end?

Whose life would you choose to lead in this tale?