Imagine how you would feel if your parents picked you up from school, and whisked you away to a foreign country? No time to say goodbye to friends, unable to pack your favourite things – in fact, having many of your school possessions dumped in a bin, never to be seen again!

On top of this, imagine they expect you to change your name (just as they have), and to ‘remember’ where you went to school as somewhere you have never heard of – and to forget where home is. This is what happens to 11-year-old Noah Keller when his parents take him to the ‘other’ Germany to support his mother’s research studies. They even tell him his birthday isn’t really in March but in November.

‘Cloud and Wallfish’ by Anne Nesbet is an interesting tale which follows Noah/Jonah and his parents at a climactic time in history – as change begins in East and West Germany – nearing the end of the Cold War.

As Noah adjusts to a confusing new home, his mother deals with her studies, and his father ‘writes his novel’ while acting as the house-parent. There are lots of rules to take on board too – it seems that East Germany isn’t very accepting of Americans, who they label as brash and opinionated. Thus, Noah stays quiet and alone for some time, acceding to his parents’ requests to stay ‘under the communists radar’.

In telling Noah’s story, ‘Cloud and Wallfish’ outlines some of the historical changes happening at the time his family are there – based on the author’s personal experiences having lived in East Berlin in 1987, and again in 1989 just before the Wall came down. 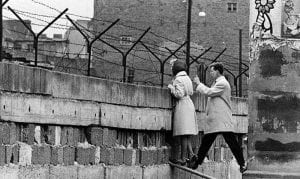 Noah’s struggles (loneliness and his own ‘Astonishing Stutter’) are buoyed in the story when he meets Cloud-Claudia; though he still also remains eager to go to school. However, that is not an easy thing to do.

Those who love a bit of history, or even just learning about other ways to view the world*, will enjoy ‘Cloud and Wallfish’. Episodes in Noah’s life are followed with some explanations, in ‘Secret File’ pages which provide an historical understanding of events.

It raises a lot of questions about the past, world politics and rules. It will also have you thinking about when it is wise to keep a secret – about yourself or others. And whether there is a time you need to reveal all you know – even if it may impact on others, because that’s what Noah has to consider time and again.

## Do Noah’s experiences and actions ring true for you? (i.e. do you think this is the way an eleven-year-old would really act?)

For details about the fall of the Berlin Wall see: Fall of Berlin Wall: How 1989 reshaped the modern world