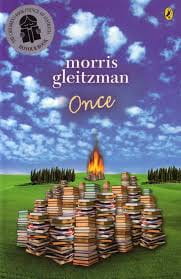 As the 75-year commemoration of the liberation of Auschwitz approached on January 2020, it was a good time to revisit the ‘Once’ series.

Written by 2018-19 Australian Children’s Laureate, Morris Gleitzman, this series has had world-renown for many years.* The first book, ‘Once’, was written in 2005 and presents Felix, a young Jewish boy, who sets off on a quest to find his parents in war-torn Poland.

What follows are several books which introduce the (younger) reader to the trials faced by those who suffered under the Nazi regime in World War II.

In spite of its tragic setting, among the events of World War II, and Hitler’s attempt to exterminate the Jewish population of Europe, ‘Once’ (and the following titles) is also a story of hope and friendships that stood the test of these times.

As Felix tries to make sense of the Nazi’s book-burning (a shock when his parents are booksellers. Why would anyone do that?) and other even more atrocious activities, the realities of his life (first in an orphanage, then further afield) reveal the conditions for many people in Poland at this time. 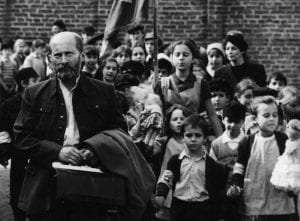 Felix’s view of life (as a ten-year-old) at first seems naive, but it enables him to have a somewhat positive perspective, as he hopes to track down his parents. However, as his story continues, different aspects of life under the Nazi regime become apparent – things like the increasingly cruel treatment of Jews AND anyone who might offer them help. As Felix’s understanding grows, there is more to be learned, each step of the way.

Author, Morris Gleitzman explains how his family background (his grandfather was a Polish Jew) lead
him to research and, ultimately, to write the ‘Once’ series:

My grandfather was a Jew from Krakow in Poland. As a young man he left Poland, decades before the Holocaust, and ended up living in England. But many members of his family stayed in Poland and most of them were killed by the Nazis.

So researching and writing Once became a personal journey. It took me to Poland for the first time. To the streets of Kazimierz, the ancient Jewish area of Krakow, and to the Jewish cemetery where I found a memorial with my family name on it… (From Morris Gleitzman website on ‘Once’.)

There are currently 6 books in this series – the final (?) title, ‘Always’, should be released later this year. Are you ready for it? Or are you like me, in need of a re-read of this important series?

* ‘Once’ has been translated into many different languages, and won the 2011 Katholischer Kinder- und Jugendbuchpreis, (the Catholic Children’s and Young People’s Book Award in Germany) among many other awards, national and international.

**** Available as ebooks and audiobooks.