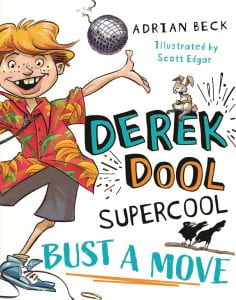 With so many great YA books about, it’s not often I pick up and review something for younger readers. However, I have just chuckled my way through the first book of ‘Derek Dool Supercool’ series – ‘Bust a Move’.

Young readers will love Derek, as he tries to convince everyone else at his school that he is as cool as he thinks himself. Especially if he can win the dance-off at Rutthill’s school disco!

Even though Derek often has other kids laughing at him (they get points if they doink him on the head in their handball games), and he is on permanent litter duty at lunchtime, he somehow still believes he is the COOLEST, FUNNIEST and most HANDSOME kid at school!

This book is full of fun characters – including Derek who’s ego is bigger than most, his “friends” Booger and Big Denise, and his arch-enemy, Carmichael Cruz. Author Adrian Beck brings them all to life through their over-exaggerated actions and emotions. We learn little things about them in short sections within the story – e.g. how Booger gets his name. 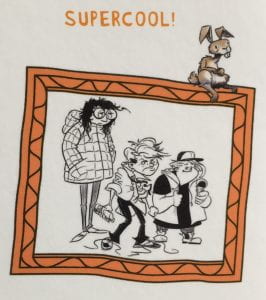 Characters Big Denise, Derek and Booger from the back cover.

Add to this wildly entertaining illustrations from Scott Edgar, and you have a great book for a relaxing but fun read. Even the text and page layout are enjoyable. Words jump out at you. Dad Jokes appear. And special characters, Gilbert and Gertie, make sarcastic comments about what is likely to happen in the story.

This is probably a book for 8+ age group, but who’s going to stop anyone older investigating what younger readers are laughing about? A fun book for the family/class to share.