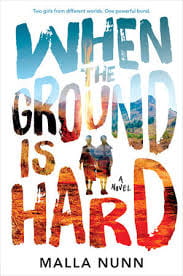 Living in Swaziland, Adele’s mother wants a better life for her daughter. Even though her father lives at a distance with his other family, Adele is well-supported and goes to a private school.

However, Adele finds things have changed when she returns to her boarding school after term-break. Her position in the ‘top girl’ group has been taken – by a girl whose father is more wealthy than her own. Worse still, she has been relegated to a room supposedly haunted by a dead student, and one she will share with an impoverished student, below her own social status.

Lottie is a uniquely bold student; either in spite of or because of her poor background. She is at Keziah Christian College as a supported student on a scholarship, and she takes no nonsense from anyone, even challenging teachers at times.

In contrast, Adele likes to keep things on an even keel. That is until her struggle with the top girls becomes heated and she has to choose a new path to get through the school term.

‘When the Ground is Hard’ is told by Malla Nunn, who was born in Swaziland and attended a mixed-race boarding school. The struggles of Adele and Lottie echo her own (and her mother’s) experiences in this #ownvoice story, as they battle to rise above the prejudices of racial segregation.

I wanted to tell a story that honoured the women and girls with whom I grew up – strong, brave, broken, vain, furious – girls who struggled to find their place in a racially segregated world where they, and I, were kept down for no good reason. (From Malla Nunn’s website.)

Adele and Lottie’s friendship is slow-growing but beautifully developed as they reluctantly team together.  Once Adele’s changed status at school opens her eyes to the levels of prejudices and hardships faced by mixed-race girls and women (particularly strong in the 1960s when the novel is set) they begin to bond. Cleverly, this is enhanced as they read Jane Eyre together, and reflect on Jane’s experiences and their own destinies.

A book which touches on many issues. Highly recommended 14+