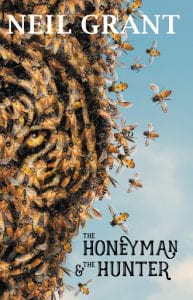 With a beautiful but intriguing cover, ‘the Honeyman and the Hunter’ presents a story combining two cultural lives lived out by a teen with both Indian and Australian heritage.

Beginning on the Central Coast of NSW, we see Rudra’s days of summer surfing are scarred by local bullies, and his early mornings are controlled by his father’s demands.

With his friend Maggs, he tries to deal with the bullies, while at home his mother tries to deflect his father’s harsh treatment. Not an idyllic summer break, as he questions his own identity and future. Is he simply destined to be a fisherman alongside his father?

In the past, his mother (once a determined science graduate, now a waitress) has endeavoured to teach him about his Indian heritage. However, it is the sudden arrival of his didima – grandmother – from India that really sparks a chain of events which results in a journey to India and a journey of self-discovery.

Neil Grant has backpacked, bussed and blundered through India, Yugoslavia, the United Kingdom, Israel, Malaysia, Thailand, Sri Lanka. Thus, his travels have provided rich research for his books – and his love of the ocean calls from the pages of the Honeyman. Elements of Indian mythology are woven through the tale also, as Rudra learns about his mother’s heritage through various people as he travels to fulfil Didima’s dying wishes.

As an Aussie Indian, Rudra is ‘caught-between’ and bumbles along, indecisive, at times. Once he has made up his mind to commit to his grandmother’s wishes, however, there is little that can stand in his way. But what are the sad consequences of some of his actions? or are the events actually out of his control? what is his destiny?

The Indian mythology in this story is intriguing; as is the mystery which slowly unravels as Rudra uncovers his family secrets. I do wish there was a glossary of some of the terms and characters used (even though they are mainly explained along the way), just so that I could follow the text more intimately.

‘The Honeyman and the Hunter’ raises many questions about family expectations, the significance of cultural differences and the impact of decisions we make on our journeys in life. A great story for the appreciation of rich cultural diversity you could well find in your Aussie neighbourhood.