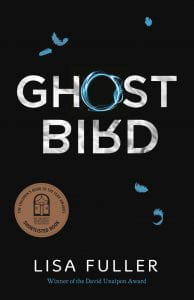 The police don’t seem to be doing much about looking for her, though her family mob are searching where they can. The divide between black and white in the outback community is pretty clear:

“Everyone knows that some parts of the town are ‘white’ territory and others are ‘black’. Even the pub has a whitefulla and a blackfulla side.”

As Laney’s twin, Stacey feels it is up to her to follow her own instincts to find her, despite repeated commands from her mother to stay put. Her nightmares continue and though respectful of her family, she must do something – including speaking with Mad May Miller.

There are many tensions within the community – between black and white, poor and wealthy, current and past landowners.  Thus, Lisa Fuller brings together elements of racism, family loyalty, past conflicts and tradition into this intriguing debut novel.

While covering only a week in a divided community, there are many questions to be answered along the way:

The characters of Stacey and her cousin Rhi are real and relatable, as are her family members and Mad May Miller. This would be a great class novel, but read it before it becomes one to enjoy the language and situations it introduces. A worthy nomination for this year’s CBCA shortlist!

# In this interview, Lisa Fuller responds to the comment: ‘One of the loveliest aspects of Ghost Bird is the infusion of your culture with a strong emphasis on family.’ and more.

EDIT: Ghost Bird is an Honour Book in this year’s CBCA Awards. Congrats!