With a delayed and adjusted awards ceremony this year, the CBCA Awards have finally been announced!

This year, I didn’t read all the shortlisted Older Readers books, but two of those I reviewed here were awarded the Honour Book status – The Boy Who Steals Houses and Ghost Bird. (I was disappointed When the Ground is Hard wasn’t also among the winners, as it was my pick.) 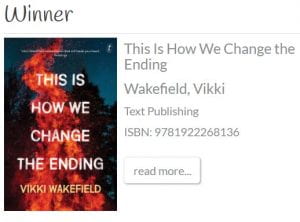 That said, how many people regularly pick the winner?

This year the winner in the Older Readers category was ‘This is How We Change the Ending’ – a tough book for the author, dealing with tough issues. Author Vikki Wakefield even expressed how writing this book made her feel uncomfortable.

It is inhabited by kids who are tough and prickly and aimless. Kids trying to figure out who they are and what they stand for. Kids who feel they have limited choices.

Hopefully, it is a book that kids, like this, will read with hope; and also one read by others better off, to develop empathy.

When the passionate Eddie Woo introduced the Younger Readers award category, he aimed to remind everyone about the power of books – including the power to help us inhabit other people’s thoughts, to embrace other people’s emotions, and thus, develop empathy for others.

Winner Pip Harry accepted her award and then showed viewers around the area of Singapore (where she now lives). However, her book, ‘the Little Wave’,  was inspired on the shores of Manly Beach, which she misses. She spoke about reading as a friend, as well as a place to learn empathy. She said she loves to write for kids “because they are the best readers”, and read the following poem which was sent to her by an avid reader:

“Writing a fiction story is like creating a world

And your head forgets who you really are.” – Amelia, Grade 3

Empathy and understanding of people in different situations seem to be key elements in many of the books involved in this year’s awards. This is also reflected in the comments of readers interviewed in the video clips, as well as many of the books. Accepting the award for Eve Pownall Award this year, Bruce Pascoe for ‘Young Dark Emu’ expressed his desire for the younger generation to develop an understanding and appreciation of Australian heritage – another book where kids can stand in the shoes of others.

What inspired you the most from this year’s awards?