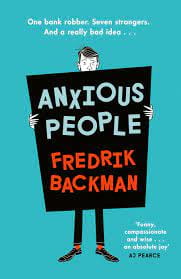 From the author of ‘A Man called Ove’, translated from Swedish, ‘Anxious People’ is a humorous book of life observations.

Set in a small Swedish town where nothing much happens, the tale opens with a bizarre bank robbery (at a cashless bank) which then turns into a hostage drama at a nearby apartment building. As a small-town police team of father and son seek to resolve the situation (without relying on the heavy guns from Stockholm), Backman sprinkles the story with the quirks and foibles of those caught up in the drama while viewing an apartment open house.

Cleverly woven links between present and past, among the characters and the building’s location, occur throughout. Similarly, clever comments on normal everyday things – like food preferences, domestic needs, and views on family relationships – give cause for a laugh or two along the way.

The bank robber is, of course, not your typical bank robber – more a result of a series of unfortunate events which culminate in a ‘hostage situation’ – again, not typical.

Each of the characters involved has their own version of what happened, and their own anxieties. Insecurities in relationships and work, perplexities about the impact of their past actions, lost loves and lives – all have left challenges to be overcome.

Even what is told from the police perspective is not completely what it seems. Have they handled the case properly? Why haven’t they had demands from the offender? How could they lose the suspect?

Backman makes some interesting observations throughout ‘Anxious People’ but in doing so, he does it gently and with humour. His characters are quirky but real (even though I disliked Zara, but maybe that was the point). An absurd situation in a little town becomes a feel-good book to make us all think while we laugh out loud.

Are you ready for a light-hearted read that also makes you think?