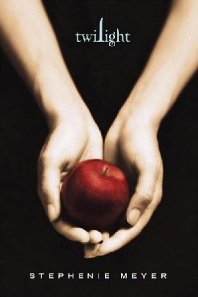 When I read it this time, I noticed a lot of things that I missed the first time. I personally think that ‘Twilight’ is a really interesting, but yet cheesy book. I don’t think that it is meant to be funny, but I found it completely hilarious.

The story is based around two teenagers who fall in love. The only catch is that one of them is not exactly what you would call normal; well certainly not normal in my world. Edward is his name and he is what you might call a vampire, he comes from a family of them – scary I know!! Edward doesn’t suck human’s blood though; he calls himself a vegetarian because he only sucks the blood of an animal. The other main character is Bella, a seventeen year old who comes to live with her dad while her mother is on holiday. She starts at her new school and somehow already has a friend who she doesn’t even know. In her science class, she is partnered up with Edward who is immediately attracted to her blood and can’t help but try to stay away from her at all times. Bella is quite curious in what might be wrong with him, and a sudden thought comes to mind that it could possibly be her. So she sniffs her t-shirt thinking that she smells bad, and I thought that was hilarious, but of course she has absolutely no idea that he is a vampire.

Over the next few days she finds more and more about Edward and does some research about what she has discovers and it all adds up to her that he is a vampire. The next day at the end of school she meets up with Edward in the forest and explains to him that she knows what he is and tells him she is not afraid. He tells her how frustrating it is for him and also how hard it is.

Bella and Edward become a couple, but Edward’s brothers and sisters are not happy with Edward’s decision – but his parents are happy to go with the flow. Later on in the story Edward’s family take Bella out to play a game of baseball. They have to go when there is thunder and lightning because when they hit the ball, because of the power and strength they have, it makes an incredibly loud noise. Half way through game, some other vampires that live off human blood come and interrupt the game, and ask if they can join in. They say yes and tell them that two people are just leaving and that is of course Bella and Edward because they need to get Bella and out of there before something happens. Unfortunately, they didn’t get a chance before one of the human blood vampires smelt Bella’s blood so a baseball game simply turned into a chase. Bella is taken by James, the bad vampire and tortured and hurt. Luckily, Edward and his family come to the rescue.

‘Twilight’ didn’t finish as well as I thought it would, but I definitely thought the book was really funny and enjoyable.