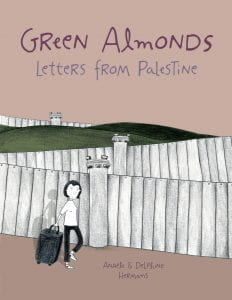 Two sisters show life in different countries and different cultures in this graphic novel by Anaele and Delphine Hermans – a memoir of Anaele’s 10-month stay in Bethlehem while volunteering for a youth organization/NGO.

Presented as postcards and letters shared between the two sisters, ‘Green Almonds’ highlights the living conditions of populations in war-torn zones of the world. At the same time, it humanises these conditions as they accept them as a ‘normal’ part of life.

Anaele’s initial arrival presented anxious times from the word go, as she negotiated customs at Tel Aviv airport in 2008. Her stories about the months that followed illustrate some of the precarious situations faced by everyday people in these occupied territories. At the same time, descriptions of simple joys in life shared amongst friends show things she enjoyed with her Palestinian friends. Cultural differences aside, there is still a place where: “we sing, we laugh, we talk until late into the night”.

As the correspondence journeys between Bethlehem and Liege, great contrasts are displayed in the lives of the two sisters. Interestingly, the postcards from Delphine mainly chat about shallow day-to-day life events at home in Liege; Anaele’s letters provide greater detail, empathy and passion about her experiences, as she negotiates a world apart from Belgium.

Of course, ‘Green Almonds’ is also a reflection of the harsh world experienced by those caught in this massive ongoing battle. As a graphic novel, it provides some introduction and insight into a dangerous conflict. Perhaps a more detailed follow-up would look deeper into the lives and relationships Anaele experienced in her time there and since her return to Belgium. (It would be an interesting continuation as she has worked to enable international volunteering projects since her return.)

Green Almonds received the Médecins Sans Frontières (Doctors Without Borders) award for the best travel diary highlighting the living conditions of populations in precarious situations when it was published in France in 2011.

Do you read non-fiction graphic novels?

Do they offer a worthwhile presentation of historic or real-world events? (e.g. the March trilogy which focuses on civil rights in the US)

Can such a memoir make you think about world events and conditions? 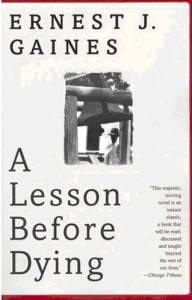 Shades of many past novels here – dare I say ‘To Kill a Mockingbird’? But then, that’s one of the things that make reading interesting.

‘Lesson before Dying’ begins with a young man caught up in an assault and robbery in a liquor store. The trouble is, the white owner and his 2 black assailants are killed in a shootout, and Jefferson, the only survivor, is found guilty of murder simply because he was there.

From the beginning, Jefferson is a condemned man. In fact, his godmother Miss Emma barely listens to the proceedings of his trial, since she knows that he will be found guilty—at this time, black man accused of killing a white man always was.

During the trial, Jefferson remains in a state of hopelessness; even as his defense lawyer speaks of him as a cornered animal, who simply struck out instinctively out of fear. It is this label, “Called him a hog..”, that Miss Emma wants removed before he dies in the electric chair.

The narrator of the tale is Grant Wiggins – a  disillusioned African-American schoolteacher. Gradually, Grant is compelled by his aunt and Miss Emma to begin visiting Jefferson to teach him how to go to his death with the dignity of a man. In doing so, he comes to evaluate his own pathetic existence.

There are many issues raised in ‘Lesson Before Dying’ arising from its setting in the States’ South, before the Civil Rights Movement; a time when African American people were still treated poorly, oppressed and helpless to rise above their downtrodden status. Even as an educated man, Grant Wiggins remains confused and disheartened about his status, and often considers leaving it all behind him – running away with his girlfriend, Vivian.

However, Grant has a lot to learn as he is ‘gently’ persuaded to visit Jefferson by Tante Lou, to try to fulfil Miss Emma’s wishes. Along the way he learns things about himself, his community and family loyalties. Does he have the skills to make a difference to Jefferson’s life (and death)? And what impacts might he and Jefferson ultimately have on the whole community – both black and white? And what will be the impact on Grant Wiggins, teacher, nephew, man?

What lessons did you learn from this powerful tale?

Like many great stories, there is a film version – here’s a trailer: 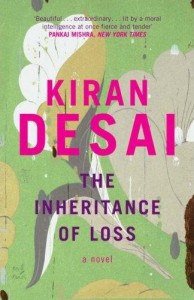 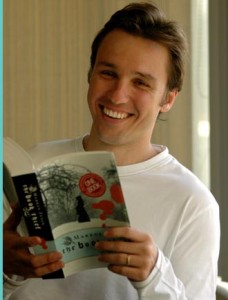 The creative genius of Markus Zusak has again received acclaim for ‘the Book Thief’  – this time in his mother’s homeland, Germany. Alongside another Aussie, Shaun Tan, Markus was awarded a prize by winning in a major category at the Deutsche Jugendliteraturpreis, Germany’s most prestigious awards for children’s and YA books.

That he should receive such acclaim for a book written about the (fictional) experience of Liesel Meminger, a child in Nazi Germany, is quite a triumph. But not one we are surprised by however, given the extraordinary tale Markus has woven; one recognised by many awards since its publication in 2005.

According to Markus, The Book Thief is a small story. (With 584 pages, I wonder how he might tell a large story?) Though it covers many pages, it is masterful and intriguing to read – so you regret when it finishes. It is an emotional ride, as Liesel navigates childhood years amid the experience of WWII, which makes the adult world even more mystifying than usual.

What she has to do to find enough to eat, to make sense of the treatment of Jews and to remain human in the frenetic world of bombing raids and persecution describe the tale. Unique friendships and creative ways to survive, bring connections through the book, as Liesel brings people together using books; stolen and shared as they huddle from the outside world in the safety of a basement.

While often referred to as Zusak’s first adult book, ‘the Book Thief’ also has great appeal for the mature young adult reader – especially those with an  interest in WWII perspectives from a child’s point of view. That the tale is narrated by Death may be offputting to some, but it enables an interesting and unique way of judging mankind.

In the opinion of German judges in the abovementioned awards:

‘many individual stories of the experience of youth in the Second World War have been written, but none match up to the narrative of this book.’

Ardagh, Philip. January 6, 2007.  It’s a Steal, the Guardian. ‘Unsettling, thought-provoking, life-affirming, triumphant and tragic, this is a novel of breathtaking scope, masterfully told. It is an important piece of work, but also a wonderful page-turner. I cannot recommend it highly enough.’

Green, John. May 14, 2005. Fighting for their Lives. New York Times. ‘Many teenagers will find the story too slow to get going… But it’s the kind of book that can be life-changing, because without ever denying the essential amorality and randomness of the natural order, “The Book Thief” offers us a believable, hard-won hope.’

Pierce, Peter. September 10, 2005. The Book Thief. The Age. ‘A prize-winning children’s author, Zusak has made a daring debut as an author of adult fiction.’

N.B. We are eagerly await Markus’ next book, ‘Bridge of Clay’ (due for release in November 2009)… We’ll keep you posted.