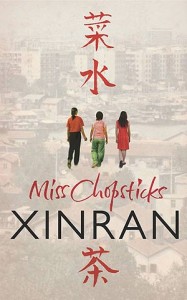 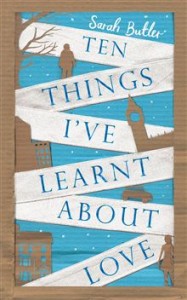 Books are not always straightforward in their presentation. Some have quirky links and techniques throughout. Some take a while to adapt to, others just make sense.

As ‘Ten Things I’ve Learnt About Love’ progresses from chapter to chapter, the story jumps between characters and lists.

One of the characters is Alice, the youngest of 3 sisters, who feels as though she doesn’t ‘fit’ her family. She is, and always has, felt unsettled and disconnected. Then, after months of travelling overseas, she arrives home to the news that her father is dying.

The other narrator who gives voice to the tale is Daniel; a homeless drifter, in search of his daughter. His synaesthesia gives him a special and interesting quality, and he too is both restless and disconnected. Unlike Alice, he lingers in one place, London – for that is where he feels his daughter is to be found.

We can guess that there will ultimately be some kind of connection between Alice and Daniel. Throughout the story they both create lists – of wants and wishes, anxieties and memories, statements of love and sorrows. It is through these lists that the reader experiences the ebb and flow of their emotions, as Sarah Butler weaves her story.

For Butler, this is a debut novel, with a clever and gradual intertwining of their lives now. Past events are slowly revealed to allow the characters to fill in the gaps and make sense of turns that have occurred in their lives. There are many times when you wonder ‘what if?’ something else had happened or ‘why?’ did this event need to occur.

For many readers, there will be time for quiet pondering about their own relationships, in spite of sitting safely in comfortable times with family and friends. As stated in its blurb:

“Heart-wrenching and life -affirming, this is a unique story of love lost and found, of rootlessness and homecoming and the power of the ties that bind. It is a story for fathers and daughters everywhere.”

For more information about Sarah Butler read this article, a guest post written by the author discussing what she learned while writing ‘Ten Things…’

What further questions would you ask if you could talk to Sarah Butler?

Did you like her collection of lists to start each chapter? 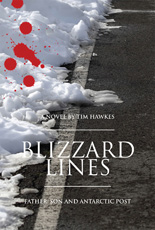