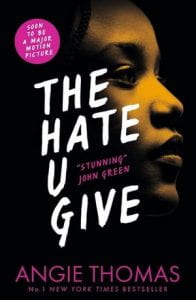 Strong, harsh and confronting. Tells it like it is. Written from an #ownvoice perspective in 2017.

This is a hard book to read at this time of disruption (though I read it several years ago – in 2018), but more people should. Think I need to re-read it now in 2020.

Starr moves between two worlds – and for some time takes on 2 personas – between school (in a privileged world) and her home (a black neighbourhood). To get ahead, education is important; for balance, friends are vital; to live, family is critical. But where can she be real?

And what can she do, as a witness to an obscene injustice in a black community? How can a black teenager seek justice for a fallen friend?

I loved the characters in THUG – Starr, Khalil (while he lasts), even her flaky white friends at school. The contrast between Starr’s school friends’ aspirations and attitudes, and her home environment is stark. The story itself is a challenging read.

It took a while for me to get into the language and culture of the main characters – but then that’s what the book is all about. [So, language warning…]

Life is not homogenous. People are not all the same. For some life is easy, for others the struggle is real.

There’s a great interview and comments from Angie Thomas here– the call for #ownvoice writers is strong. There’s also a video discussing her inspiration for the book some 6 0r 7 years earlier:

I do now wonder what Angie might say today – in this time of #blacklifematters.

Read ‘The Hate You Give’ and reassess what you think.

# Is it important for stories like this to be told by #ownvoice writers? 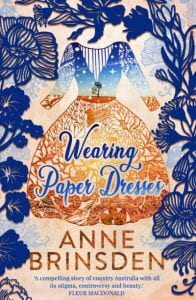 Wearing Paper Dresses is a story you can feel. In its pages, even a city-slicker can begin to understand the stresses and strains of rural life – and to anticipate the troubles to come.

In this debut novel, Anne Brinsden introduces us to a family dealing not only with the struggles of drought but also the struggles of adapting to a ‘foreign’ lifestyle. For indeed that is what it is like for Elise, who marries Bill while he is working in the city (where she belongs). In the city, they start to build their family life.

When Bill’s father (known as Pa) calls him back to help on the family farm in the Mallee region of Victoria, Elise and their daughters must follow. Her urban background offers little to support her in her new environment (a working farm planted in tough conditions), and her own upbringing stands her apart from the community into which she must now try to blend.

“But Elise wasn’t from the Mallee, and she knew nothing of its ways.”

The Mallee, its weather and even their farmhouse are alive and important in this story. Each of these elements has emotions and thoughts, as they ‘watch’ events unfold. Through them, you are forewarned of looming difficulties. You really feel ominous tremors as you read.

Subtle changes in Elise arise as she tries to adapt to rural life. Unfortunately, Bill is either too busy, or reluctant, or unable to see these changes. While Pa and others try to point these out, their daughters Ruby and Marjorie run wild. They also bear the brunt of Elise’s difficulties and take on many of her family responsibilities.

Thus the girls spend their time ‘on eggshells’ – anticipating the next time Elise will do something strange or moody or threatening. Her attempts to become part of the rural community fail, as she is viewed as too glamorous for the country. Her cooking skills are too fussy (especially for the shearers who want plain country tucker). Some local women find her pretentious and show-offy in her Paris-inspired home-sewn creations. Even her musical talents don’t seem to impress – at least that is what she begins to think.

Indeed, much of the difficulty comes as Elise begins to doubt herself, and as she fails to understand how to adapt to her country home. Lacking emotional support, Elise suffers several breakdowns – which youngest daughter Marjorie identifies as the ‘glimmer’ beginning.

Wearing Paper Dresses speaks to the heart of the many struggles faced by those on the land, even though it focusses on the mental health of an outsider unable to cope, rather than the fraught farmer. But does Bill’s inability to act for Elise simply show a different coping mechanism? and a danger to his family?

At this time of drought, as Australian farmers struggle to survive, this is a challenging story which reminds us of the harshness of our beautiful land. It honours the resilience of many rural communities while illustrating the fragility of some personalities who may live there. It recognises the impact of things out of our control. Ultimately, it reveals the strength of human spirit and the optimism which ties people to the land, which we should aspire to and wholeheartedly applaud. 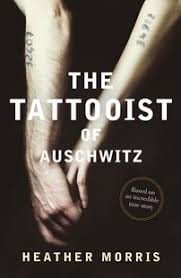 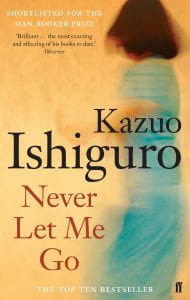 That is the issue with this post about the award-winning tale, Never Let Me Go.

Masters of the trade (authors and their publishers) are careful with what they reveal on the cover and back of the book. So what can a reviewer use?

Maybe you should focus on what others say about the author?

‘Kazuo Ishiguro is a master storyteller, in a class of his own making.’ Independent.

‘Ishiguro has always been good at presenting the past – and childhood – as a kind of universal affliction, but probably never so well as in this novel…’ New Statesman

‘Ishiguro’s novels are preoccupied by memories, their potential to digress and distort, to forget and to silence, and, above all, to haunt.’ British Council – Literature

Or take an excerpt from the blurb:

‘Kazuo imagines the lives of a group of students growing up in a darkly skewed version of contemporary England.’

You then may ask yourself: who are the students? what is their special story? what genre is it? (dystopian, mystery?)

Initially, Hailsham School appears to be an idyllic location – perhaps a privileged boarding school location. Students have their own special quirks and idiosyncracies. They develop close friendships within their small group, as might happen at any school. But the school’s purpose is what waits to be discovered as you travel through the years; as narrated by Kathy, one of the former students.

Over three stages of Kathy’s life, we learn more about friendships, fortune and the fragility of life.

There are many levels on which you can read this tale – and then, wonder what thoughts Ishiguro meant to spark. Of course, a film interpretation has been produced, but really, you should read the book before seeing it – to avoid the spoilers of knowing the story before reading it, and to develop your own experience and understanding first. (Hopefully, this trailer is more enticing than revealing…)

# If you have read this before, would you read it again? Was it a different experience ‘knowing’ parts of the story, or did you just enjoy the rediscovery as you went along?