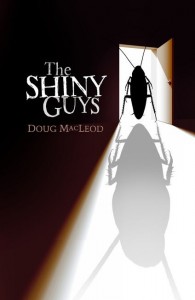 Dr Maximew and Dr Vendra smile. They don’t even look that much like cockroaches. They resemble grasshoppers, except they’re red. And everyone knows grasshoppers are friendly, with nice faces and big round eyes. Whoever heard of evil grasshoppers?

To look at Colin, he would appear to be a normal teenage boy. What isn’t normal is that he spends all day in grey pyjamas, shares a room with Len the basket weaver, and is frequently haunted by visions of ‘shiny guys’.

The reasons why the ‘shiny guys’ visit Colin isn’t clearly apparent in the early stages of the story. However, their visits seem to be of concern to his family and the medical staff. For Colin, they are an accepted part of his day.

Through Colin’s eyes, we view how a mental institution runs – with shades of ‘One Flew over the Cuckoo’s Nest’ in some of his descriptions. Like McMurphy, Colin tries to buck the system, sometimes not taking his medication, and often critiquing the methods used in Ward 44:

“Don’t you think it’s in really bad taste to have shell-shocked Vietnam vets weaving things that look like the hats worn by the people who were trying to kill them?” (Colin asks Dr Parkinson in one of his regular sessions.)

Like McMurphy, Colin also plans his escape. He collects supplies, stores them in a secret location and keeps a keen watch on staff movements. He recruits a few friends to join him. Occasionally, the ‘shiny guys’ embolden him, tell him not to take his meds, and help him to see things more clearly (or do they?).

Other characters woven into the story provide a few different perspectives – Mango, who suffers from an attachment disorder, and Anthea, suffering anorexia. Slowly, their stories unfold as they struggle to come closer to ‘normal’ behaviour that society expects of them.

Doug Macleod’s writing is known to be funny and tongue-in-cheek. ‘The Shiny Guys’ meets this expectation, while addressing some serious issues along the way. Macleod even acknowledges himself that much of the story was inspired by real events which occurred in his life: depression and the effects of a stroke, and of course further research into some of their effects. Here is Doug’s own review of ‘the Shiny Guys’ and some interesting insights to how it was written.

As a nominee for the CBCA Older Reader awards, this is another edition which gets my vote.  Do you agree? 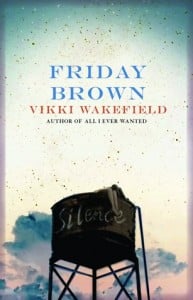 She had escaped from home – and why not? After all, everything she ever knew was meaningless now her mother was gone. So she was running –  “trying to escape memories of her mother and the family curse.”

After spending all her years in the countryside, Friday Brown ends up homeless in the city. While she was with her mother, wherever the two of them were together – that was home. But now alone, she determined to find herself a place to be.

Through a series of events at a railway station, she develops a friendship with a strange and silent young boy. With Silence, she then comes under the wing of Arden, who along with the smouldering Malik, leads a small band of homeless kids with a Dickensian lifestyle in inner Sydney.

Belonging has always been hard for Friday. With her mother, she would traipse around the countryside – moving on when things became too stressful or demanding. From an early age, she knew the signs of an impending move – when the money ran out, or her mother was out of favour with her current employer.

After her mother’s death (presumably due to her family curse) Friday decides to run. But why is she really running away? Is life going to be any better, homeless, in the city?

Slowly, Friday adjusts to a chaotic life, with some unusual ‘housemates’ – but she is never quite comfortable with everyone, or with life in the city. Technically, they are homeless, squatting in an abandoned building till disaster strikes.

Change takes the dischordant group to the countryside, where Friday’s past gives her the strength and courage to take a stand and, occasionally, to take the lead. Relationships are tried and tested, and all in Arden’s ‘family’ discover different things about themselves and others. Instinct and cunning – are they enough to help Friday survive? Who is friend and who is foe? And what about her family curse?

Some surprising and tragic events throughout.

Selected for CBCA awards this year – it would definitely be one of my choices! What do you think?

For more reviews, see Inside a Dog or GoodReads 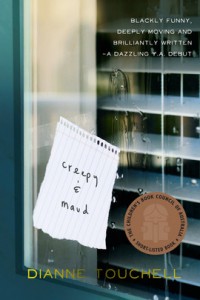 Chosen as one of the CBCA Shortlisted books but I can’t see why.

The characters were a bit ‘creepy’ and unrealistic for me – maybe the author was in for shock value.

I usually review the all CBCA books for my blog, but this will be a short one, as I have a rule: if you can’t say something nice then don’t review it…

What do you think? I am missing the point?

“The point is to stay human.” Erika bent over a bowl of brown water and splashed her face. “We musn’t become animals, Hanna. That’s what they want.”

“It’s the only way to beat them, ” Erika said… “Survive, and when you do, tell everyone what you saw – “

If life in Budapest in 1944 had been difficult before, it was only going to get worse for Hanna’s family – they are moved out of the Jewish ghetto that had been their home. Uprooted from their modest home and sent packing with few belongings, they are transported by rail to an uncertain future in Birkenau – a place we now know as a Nazi concentration / extermination camp.

Since the story is told from the point of view of a young (15 year old) girl, the reader is not exposed to the whole extent of the Jewish holocaust. Initially, Hanna and her family naively anticipate that they are simply being relocated temporarily. Hanna’s dreams of becoming a famous concert pianist linger for a while, and she clings to the hope of her family staying together.

The reality of their eventual separations dawns slowly, as Hanna’s mother loses her sanity and her will to survive. Her older sister, Erika, begins as the stronger one, but as their dismal living conditions impact on her health, it is Hanna who looks after them. Hanna’s saving grace is her ability to play the piano and the opportunity to escape Birkenau daily, gives her a marginally better existence than the others detained there.

Music gives Hanna an escape route – both physically (since she leaves the camp to play for the Commandant) and mentally (as she loses herself in her music as she plays). It is also how she connects little by little with the Commandant’s son, Karl – a music student and a Jewish sympathiser. But we do not escape the grim and devastating situation that millions of Jews faced during WWII – the desperation and suffering faced before atrocious deaths.

For Suzy Zail, this children’s book follows on from her father-daughter memoir The Tattooed Flower, published in May 2006. Both tackle a hard subject, about which many tales have already been written. Her own personal connections (her father being a survivor of Auschwitz) have enabled an authentic voice to come through in ‘the Wrong Boy’, as we see things from the point of view of a displaced young teen facing a future far removed from her dreams.

When asked about her book, Suzy made the following comments:

“Writing this book allowed me to revisit my father’s story and remember him and the millions of other children and teenagers who didn’t survive”, Suzy says.

“It was also the perfect way to pass on [my father’s] warning, because only by remembering can we prevent the past from fading. By reading about the Holocaust and trying to understand it we can make sure it never happens again.”

Let’s hope that we do learn.

Each year there are many wonderful books written for Australian children by Australian authors. In recognition of this, the Children’s Book Council of Australia creates a list of titles which is ‘notable’, and from this list, a shortlist of those considered ‘best’ is compiled.

In the ‘Older Readers’ category, the shortlist for 2013’s Children’s Book Council of Australia awards (announced in April) included the following books: 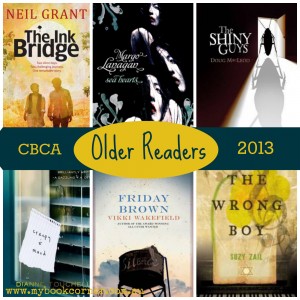 These books are always popular additions to school and public libraries, so there will be much discussion and debate before the Book of the Year and Honour books are announced in August.

Reviews of the above titles will appear graduually on this blog also.

Till then, read on – form your own opinions and make any comment about why you would nominate a particular title above others.

## Thanks to http://mybookcorner.com.au for the borrowed image above.