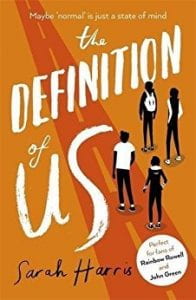 What are your friends like? Do they talk, act and think the same as you? Or do they have a few quirky differences in their personalities?

In ‘the Definition of Us’ it would seem that Florence, Jasper, Andrew and Wilf have little in common, except that they attend the Manor Lane Therapy Centre. Each of them has their own problems and idiosyncracies, so why would they even think to do a road trip to Wales together?

It is when their therapist, Howard, goes missing without warning that they decide to track him down. How could he leave them without notice or explanation? Especially Florence, since she is facing a critical anniversary at the time, and is in need of his support to get through the weekend.

Each of the quartet has their own reasons for needing therapy, and while they are an unlikely friendship group, their shared goal (to find Howard) brings them into some interesting situations. As individuals, they respond differently to the events which happen, but together they rise above the challenges they meet along the way – eventually.

At crisis times, they are even able to provide some sort of reasoned therapy for each other, in the absence of Howard!

Author, Sarah Harris, has developed a fun but thoughtful way of looking at several mental health conditions; even if events are somewhat questionable at times. YA readers should identify with many of the issues within the group and should appreciate the ideas expressed by each individual.

(Even if you don’t have such an issue yourself, there may be food for thought about how others around you feel – though they may hide their own realities.)

Florence is particularly likeable, with her love for words emitting strong emotions, and her observations seemingly narrating the story. However other characters, like Andrew, also have a lot to say:

“It’s not funny. You think I’m just one big joke. You call me names and put me down but I’m not a robot. I do care. I spend a lot of time trying to understad people because I want them to like me… Why does no-one ever try to understand me?” (Andrew, p. 101, found after he ran away from the group on the freeway)

‘The Definition of Us’ pries into the hidden lives of Florence, Jasper, Andrew and Wilf to make us question what is really ‘normal’ – and make us think about how we treat others and ourselves.

* Do you always have to conform to the expectations of others? 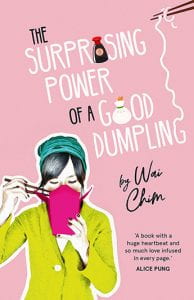 When I first began reading ‘the Surprising Power of a Good Dumpling’ it made me recall ‘Front Desk’ by Kelly Yang (reviewed here). Both stories deal with families of Asian heritage, and their struggles to assimilate in a Western culture and daughters battling with their parents’ expectations of their school achievements. However, as a novel for an older reader, SPOAGD has more layers and detail.

As the eldest sibling, Anna has a lot of responsibility – especially since there are times when her mother won’t get out of bed for weeks on end. Her father seems more focussed on the operation of the family restaurant, and even spends overnights there since it is some distance from home. Thus, Anna, Lily (her younger, smart sister) and Michael (her kindergarten brother) are left to cope as best they can.

Though they recognise that their mother’s behaviour is not ‘normal’, the children are unable, or unwilling to seek help – family pride – and their father appears too weak to act.

Family struggles arise. Michael’s teacher wishes to see his mother. Anna’s teachers push her to lift her game, as she nears the senior years of school. Previously-loyal employees leave the restaurant for better opportunities. Their father spends even more time away from home, seemingly ignoring his wife’s health issues and their impact on the family.

When she goes to help out at the restaurant in the school holidays, Anna meets Rory, who begins work as their delivery boy. Slowly, a vital friendship grows, and Anna is confronted by the struggles that others around her also face.

Dealing with mental illness, SPOAGD highlights how hard it is to take action and get help. In the layers of the story, bullying, suicide, stress and depression are carefully exposed. As a reader, you anticipate some of the key characters opening up to each other, as they identify with similar problems.

But, credit to author, Wai Chim, there is no easy path for Anna, Rory, or others like school acquaintance, Wei. However new friendships and old loyalties form a comforting base for Anna and Rory, as they work through their individual struggles.

The story subtly points out some of the tiny ways in which different cultures critique and antagonise one another – sometimes without even understanding their impact. At the same time, it shows that the nuances of each family’s cultural background is important.

As Wai Chim states, the power of own voice stories is important, and books like ‘the Surprising Power of a Good Dumpling’ provide some interesting insights into different cultures, without lecturing. It’s a coming of age story, with lots of ups and downs to keep you emotionally connected to the very end.

# Other books by Wai Chim include ‘Freedom Swimmer’, ‘Shaozhen’ (a CBCA Notable book for Younger Readers for 2018, set in China) and a number of picture books in the Chook Chook series.

# How important is it that authors represent or write about their own culture?

## As someone who now lives in Australia, born in the USA, does Wai have the credentials to write Chinese ‘own voice stories? 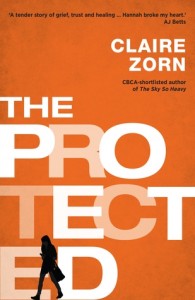 Almost 12 months after her sister’s accident, and with a court case looming, Hannah is still struggling. But she is not alone – her mother drifts aimlessly about much of the time and her father has also lost his spark, sustaining both physical and emotional injuries. This is much as you might expect when a family loses a sister/daughter.

Hannah, however, must continue her journey as a school student, facing the many trials and tribulations of adolescence.

Strangely, in some ways, life is easier at school without her sister. Before the accident, Hannah was bullied at school, with little help from her older sister, Katie. In fact, Katie’s presence often made things worse, as Hannah failed to develop the same standing at school, and Katie failed to lend any sisterly support. (Should Hannah feel guilty about this?)

The enjoyable part of Claire Zorn’s writing is how she captures place and time. Set in the Blue Mountains, the school and social situations in the Protected ring true. As with the Sky So Heavy, her characters are authentic, move about in real places in the community, and some act as thoughtlessly as egocentric teenagers sometimes do.

However, Hannah doesn’t have to struggle alone all through the book, and there are ultimately different degrees of healing for the family. Quirky little inserts (lists, goals, likes and dislikes) hint at the sisters’ relationship, differences between them and add the flavour of sibling intimacy. Thus, some of the situations will make you squirm, while others will have you cheering on the efforts of those who aim to help. 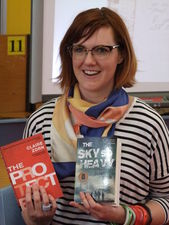 So, the story probably isn’t new (reflect back to the Incredible Here and Now, a male perspective), but the way in which it unfolds is real and believeable. Since people react to loss in many different ways, it is valuable for us as readers to take the time to step into someone else’s shoes; which indeed we can do as we read the Protected.

Congratulations to Claire; just like the Sky So Heavy in 2014, the Protected has been shortlisted for the Older Readers CBCA awards in 2015. (For a little insight to the author, you can read: Claire Zorn, author of The Protected, answers Ten Terrifying Questions)

Clementine has had a fabulous relationship with her aunt, Stella – who is only 10 years older. But one fateful day she sees her groovy aunt smashed by an oncoming bus, right in front of her.

For some, funerals are a place to farewell a loved one – for Clementine, Stella’s funeral launches her into a rage against life. Nothing seems to make sense anymore, and she dives into great depths of depression. She no longer sees the need to  conform to any of the world’s standards, or connect in any way to her school, friends or family.

After the funeral, Clementine joins her mother and grandmother at Stella’s, collecting and sorting though Stella’s things for memorable items. A crazy quilt, a favourite jacket and some of Stella’s diaries are among the items collected by Clementine. Unfortunately, the diaries reveal a lot of things that Clementine doesn’t know about her aunt – and many things her mother had protected her from.

As a result, Clementine dives even further into herself and fails to consider why her mother made the choices she did regarding her aunt. Within herself, Clementine has a lot to deal with – the betrayal of those close to her, her own great sorrow with the loss of her aunt, and the goodhearted but clumsy attempts of her friends, as they try to pull her out of the depression which follows.

‘Divine Clementine’ is a debut novel for Hayley S. Kirk. She deals realistically with problems that many teens could face, as illness and death challenge the solidity of families, and the voices in the story are genuine. What do you think? 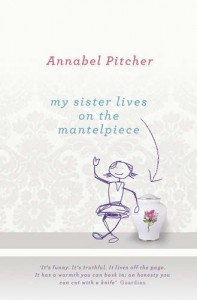 Once upon a time, Jamie had twin sisters – but that was before the bombing. Since then, the fairytale has changed, and his family has become disjointed.

Now, his mum lives in London; while he and his sister (Rose’s twin) live with their alcoholic father – with Rose’s cremation urn on their mantelpiece.

‘My Sister Lives on the Mantelpiece’ is told from the perspective of 10 year old Jamie, as he struggles to settle into a new school; dealing with bullying issues and the impacts of the family’s horrendous past. Clearly, Dad still struggles with the loss of a child; and Rose’s twin, Jasmine, reveals her own issues along the way.

Jamie is ever-hopeful that his mum will return,  and take family life back to normal. In the meantime, one of his only friends at school is Sunya – a girl with Muslim heritage.  It is hard for Jamie, in his childhood innocence, to understand why this might be a problem for his father to deal with.

So Jamie hatches a plan – one which will bring Mum back to the family, even though she already seems to have missed some of the most important family events in the last year. Jasmine is reluctant to get on board with his plans, but may be convinced to help out. And what about Sunya – will she understand that Jamie is not like his father? and would her parents also forgive Jamie for his father’s intolerances?

Lots of issues are reflected in this tale – told without driving to a fairy tale ending. It’s a well written debut novel for Annabel Pitcher – I’m just not sure about any of the cover images I’ve seen yet. Will they grab the audience they need?

Engaging, sad, reflective. What do you think?