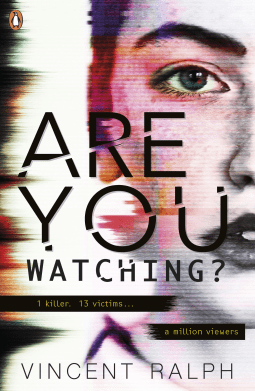 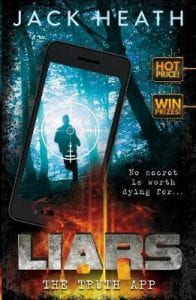 The Truth App is the first in the Liars series, written by Jack Heath – author of Replica, reviewed here previously. Like 300 /400/500 Minutes of Danger, it is written for readers about 10-14 years old, and should entice even the most reluctant reader.

It introduces young Jarli, the inventor of an app which can identify when people are lying. Imagine that! You would expect this to be a good thing, but certain events which occur in Jarli’s hometown of Kelso suggest that might not be the case.

As in most Jack Heath novels, the action starts early, with Jarli and his father involved in an attack on their car – no accident, but the police don’t want to believe him. As his father recovers in hospital, Jarli tries to work out what actually happened.

Meanwhile, he has other issues with his Truth App. He releases it free online to have others help him perfect the coding. The unexpected fame which results is both a blessing and a curse, including attacks from fellow students – those who don’t want their lies uncovered.

But there are bigger things at stake, which are revealed as Jarli and his friends work through what is happening in the sleepy little town of Kelso. Soon, Jarli has to decide who he can trust, and who will best help out in the dire consequences he faces.

The Truth App is not totally resolved at the end – with much more to come in the series – followed by No Survivors (and now at book 5, the Armageddon). To decide if this action-packed book for you, there is an extract available here – you won’t be sorry!

# Have a look at Jack Heath’s website for even more intriguing information about him and his writing. 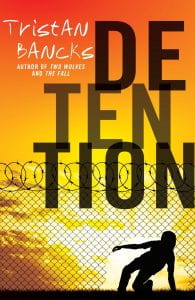 What inspires a writer? Well, just about anything in everyday life, it seems.

Listening to Tristan Bancks being interviewed on TV the other day made this quite clear. His new book, Detention, was inspired during a school visit when there was a lockdown. As a school visitor, he was involved in the drill, and listened as the teachers and students discussed examples of lockdown situations they had experienced in the past.

Spinning on from this, his creative mind pondered what else might generate a lockdown situation. Then an actual news item, about asylum seekers on the run, further sparked his ideas for a story involving a young girl whose family attempts to escape a detention centre.

While I have not yet read Detention, early reviews suggest that fans of Two Wolves and the Fall will again enjoy a thriller from Bancks. (You can also view the first part of his book – and then submit your own reviews directly back to Tristan! Just click on the link in the quote below.)

And now it’s your turn. You’ve read the early Detention book reviews and I’d love to read your review. The first three chapters are free and you can buy it in Australian bookstores big and small from 2 July. (from Tristan’s website)

Detention tackles the issues faced by young asylum seekers, giving readers lots to think about – putting them in the shoes of those caught in the politics of the world through no fault of their own. You can expect real characters which you can identify with, as well as a situation which you may need to think about carefully, dealing with the tragic experience faced by many fleeing conflicts around the globe.

Of course, there is a lot more work involved in story-writing, including lots of authentic research (which Tristan discusses in the TV interview here). But then, you wouldn’t expect anything less for a result like this! 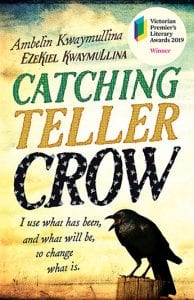 Catching Teller Crow is an intriguing mystery, told in two voices through poetry and story.

Sixteen-year-old Beth begins the tale, introducing her death and the need to look out for her father since the accident. He is the only one who can see her (she is a ghost), and she hopes to be able to help him move on with his life. She is also there to help him work through mysterious happenings in their home town, in an effort to get him back to police work.

In crime story tradition, events and clues are revealed gradually, and both Beth and her father have differing interpretations of what they mean.

Some clues are provided by strange revelations from Isobel Catching, who is the second voice in the novel. Her voice differs from Beth’s. Using poetic form creates a wariness in her character and at times implies a reluctance to help solve the mystery.#

Authors, Ambelin and Ezekiel Kwaymullina, have created an enthralling, though somewhat disturbing novel, which reflects some of Australia’s past attitudes and actions. The main characters (Beth, Catching and Crow) are Aboriginal, and have each suffered due to that. However, themes of love and family, along with their spiritual beliefs are also strong in the story. When they finally bond together, they become strong together.

A ghost story as well as a psychological thriller, Catching Teller Crow seamlessly weaves together the poetic and everyday life – Justine Larbalestier

Sister and brother, Ambelin and Ezekiel Kwaymullina speak briefly here about the writing process, and their own personal need to tell their story – “We wanted the strength of those (past Aboriginal) generations to flow through the pages like a river.”

Catching Teller Crow is more than just a crime story. It reaches into the past, hoping to make an impact on the future. It will make you think – what really happened? who is to blame? and finally, who has suffered as a consequence?

Can Beth ultimately be able to let go?

# This poetic form wasn’t as obvious in the audio version of this book, though the different character voices were well defined by the narrator, Miranda Tapsell. A great option! 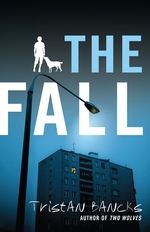 Sam wakes in the middle of the night after hearing angry voices in the apartment above his Dad’s. Then he witnesses a man fall from above, and thud into the pavement. As the son of a crime reporter, he quickly records details on his phone, and is seen by the man leaning over the body. Now he could be his next victim.

Sam is staying at his estranged father’s place, after his mother finally relents, while he recovers from recent surgery. His father remains a mystery and strangely is not around for Sam to tell him what he saw. Alone, he feels threatened, waiting for the murderer to seek him out.

Adoration for his absent father has lead to an interest in uncovering crimes, so Sam tries to employ logical thinking to find out more about the fall – even though the body has mysteriously disappeared. His tactics reflect some of the ideas he often adds in his own crime comics, which feature a hero detective, modelled on his perceptions of his absent father.

“Suspense in spades! You will be gripped by Sam’s story.” Author, James Phelan.

How will things unfold for Sam – a young boy, deserted by his father in an apartment and facing a murderer’s imminent return? What would you do in Sam’s position? Tell the police (his father didn’t want to contact them…)? Run away? Go back home in a hurry?

Tristan Bancks is not only a writer, but has been an actor and also involved in film-making. His previous YA book, Two Wolves, won Honour Book in the 2015 Children’s Book Council of Australia Book of the Year Awards and was shortlisted for the Prime Minister’s Literary Awards. Another mystery-crime story, which was cleverly introduced by this video:

Tristan is also keen on sharing his insights into the writing process and encouraging kids to read. There are lots of ideas at his website: http://www.tristanbancks.com/p/create.html and more on his YouTube channel like this one: 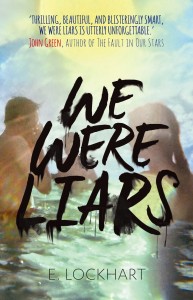 Summers for Cadence were idyllic – spent on her family’s island with her cousins, aunts and grandparents. Then, when she is 15, (Summer 15) Gat arrives at the island sparking a bit of interest, kindlings of love… and a bit of tension, as he doesn’t quite meet the ‘Family’s’ standards.

Yes, the Sinclair Family is somewhat well-off – and well-respected because of this, it seems. But inside the family, things are not so perfect.

However, Cady’s memories of ‘Summer 15’ are vague – and there is mystery behind tragic happenings at this time. Things Cady would rather forget, it seems – or things her mind and body won’t let her remember; even though her mother has explained it to her numerous times. Now, the doctors say, it is better if Cady remembers in her own time…

After a summer away from the island, Cady returns in search of answers and explanations:

For a taste of ‘We Were Liars’, you can view the author, E. Lockhart, reading the opening here:

‘We Were Liars’ is intriguing – and has you guessing all along the way – but still has surprise in store. Can you anticipate the ending?