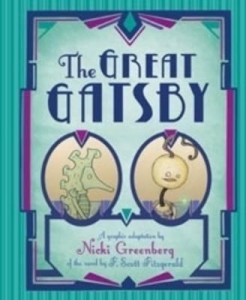 A new view of the classic novel by F.Scott Fitzgerald is presented by Nicki Greenberg in her graphic adaptation – a book which was six years in the making. The suave Jay Gatsby comes to life as a seahorse, perhaps alluding to him as a creature of mystery and intrigue. His lifelong love interest, Daisy, features as a dandelion creature, and friend to all, Nick Carraway, presents in a slug-like appearance as he narrates the tragic tale.

Other characters within Nicki’s adaptation include the seductive Jordan Baker, Daisy’s long-time friend; with a somewhat shady side to her, Jordan’s squid-like appearance exudes her questionable nature. Another, Tom Buchanan who is Daisy’s husband, is a barechested beast of a character, with threatening size and appearance in most of the frames in which he appears. In both cases their nature is well defined by their appearance rather than words.

The era in which the novel was set is alluded to visually, using sepia tones and with frames set out like an old photo album. Greenberg alludes to the partying and glamour associated with the Gatsby lifestyle, as the in-crowd frolic in many of the photos. She also captures some of the inanity and vagueness of the partygoers’s conversations (reflecting their true interest: in being seen at Gatsby’s), though they finally fade to be ghosts of insignificance in the background as the story develops.

Reading ‘the Great Gatsby’ as a graphic novel brings about a different experience. But be warned: while some people read graphic novels rather quickly, it is well worth taking the time to absorb all the features – and to consider how Greenberg can change the tone of the story with colour, shading, placement of the frames and text within the frames. Use of whitespace (which is actually black) also works to alter the speed with which the story needs to be read. Even the changing placement of the individual picture/photo frames can impact on the pace and mood of the tale.

To paraphrase Nicki’s own words (when she was referring to a fellow graphic novelist’s book):

…try, if you possibly can, to slow down just a tiny bit. Linger a little in the wonderful lush landscapes of (Gatsby’s world and the fabulous intrigues of 1920’s New York). Enjoy the clever use of space in the page layouts, the colours and textures, and the complex blocking required to portray so many characters’ interlocking conversations.

For now, I think I will revisit both versions of the Great Gatsby again soon – the original to find the tone of the original author, and Nicki Greenberg’s version to find those intricate details I have missed the first time around. For more about the book from the author, see: http://nickigreenberg.com/gatsby.shtml.

There is also a great video where Nicki speaks about creating a graphic novel and points out some of the dfferences to a ‘normal’ book at: http://nickigreenberg.blogspot.com.au/2010/05/talking-about-adapting-gatsby.html – which makes really interesting viewing. If you haven’t tried a graphic novel before, then gives this book a go or look at some of those mentioned earlier on this blog. 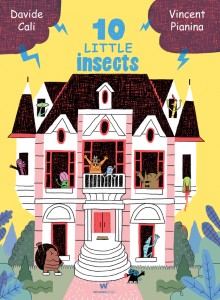 When I first heard of ’10 Little Insects’ at a recent CBCA conference in Adelaide, I thought it would be fun to read. I didn’t expect to be sitting and giggling as I moved through the pages – much to the mirth of my family, on a glum Saturday afternoon.

From the first pages of this new graphic novel, to the very end (which I almost missed…) there was a lot to keep you laughing and musing about along the way. In this whodunnit mystery, we follow the trails of 10 insects invited to Tortoise Island for a variety of curious reasons. Each ‘guest’ has come along with a different expectation of a weekend at an exclusive, but mysterious mansion on a secluded island.

Unfortunately, one by one, they meet an untimely death – reminiscent of Agatha Christie’s ‘And Then There Were None’ (or ‘Ten Little Indians’ as it was released in the US). Of course they attempt to solve the mystery of individual deaths along the way, but as in any good Agatha Christie novel, the crimes aren’t solved completely till the very end; in an extremely humorous way.

’10 Little Insects’ was launched in Australia by Nicki Greenberg, a very clever Australian writer and illustrator, with an affinity for graphic novels. You can read her comments from the launch, and thus understand why she was the ideal candidate to launch the book in Australia. Read her comments carefully, especially when she implores:

“…try, if you possibly can, to slow down just a tiny bit. Linger a little in the wonderful lush landscapes of the island and the fabulous interiors of the mansion. Enjoy the clever use of space in the page layouts, the colours and textures, and the complex blocking required to portray so many characters’ interlocking conversations.”  (Nicki Greenberg,  http://wilkinsfarago.wordpress.com/2012/05/23/guest-post-nicki-greenberg-on-10-little-insects/)

And since Nicki spoke so eloquently and effusively about this book, there is little more I can say – except to recommend your read this, whenever you get the chance… then read it again to pick up what you missed (either in the clever illustrations of Vincent Pianina, Davide Cali’s punctuating text) the first time.

Do you enjoy graphic novels? or are they something new you are yet to explore?  are you like me, and would like to compare them with the original (if they are an adaptation)? or would you just prefer to take them at face value?