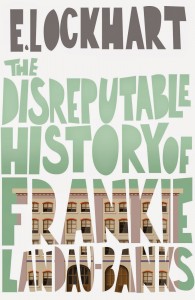 The fascinating novel, The disreputable history of Frankie Landau-Banks, has a great sense of adventure and mystery through out the narrative.

E.Lockhart has intrigued the reader, by the use of many exquisite language techniques and devices, allowing the reader to weave into all the corners of the main character’s mind, wrapping the reader into the novel. E.Lockhart uses her unique writing techniques to capture the reader from the beginning, by leaving a trail of evidence to the wild events that evolve within the book.

The novel follows the American high school experience of wallflower, Frankie Landau- Banks, and her metamorphosis into an independent, powerful woman. An engaging read, strongly recommended for the teenage reader.

Fabulous, Laura – sounds like another great novel from the author of We Were Liars – previously reviewed here. 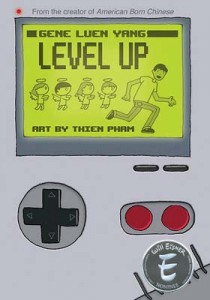 Gene Luen Yang is a clever writer of graphic novels – though this is probably not the career path his parents would have chosen for him. This insight is given in an interesting dedication at the beginning of the book:

Dedicated to our brothers Jon and Thinh, both of whom work in the medical field, for being good Asian sons.

Dennis Ouyang is the main protagonist in Level Up, and his parents have high expectations for their only son – that he should be a gastroenterologist. Dennis, on the other hand, would rather be playing video games. His struggle with meeting his parents wishes or following his own interests would be familiar to many young adults, particularly those with strong cultural influences on how a child should respect his/her elders.

Yang, and illustrator Thien Pham, have used some interesting techniques in this graphic novel:

# The early pages are shaded blue as we are introduced to the potential conflict of ideas of Dennis and his parents.

# Colour also plays an interesting part in depicting some of the unsavoury choices Dennis takes, the visitations he has (in his mind) from his father,  stronger colours are used during normal day-to-day situations.

# Symbols like angels and feathers link events to the past, and video game characters haunt Dennis till he overcomes certain issues.

# The novel is sectioned like a video game with new levels being achieved as the novel develops and Dennis’ choices take effect. As in videogames, Dennis does not always ‘finish the level’ and his path is sometimes bumpy.

As Dennis struggles to work out which is the right path for him to take, his mind begins to play tricks on him and he has visitations – from his father, from an angelic chorus (his conscience?) and from the ghosts of an old computer game. Though he at first happily drops out of medical school, and achieves fame and fortune in the videogaming world, there are more changes to come. Will he ultimately discover who he really is? Whose expectations he will meet in the future – his dead father’s? His ill mother’s? his own?

Yang himself may have faced the same struggles in his youth. While it is said his parents tried to instill in him a strong work ethic and traditional Asian culture, they also told him stories. It is clear that this combination inspired his creative skills with a will to achieve – though not in the medical field.

With Pham’s quirky but expressive illustrations, he has created a clever and humorous story, which also makes you wonder about which is the right direction to take in life. Being built around a videogame-style concept makes it appealing and quick to read. However, it is worth a closer look once you finish to find all the little elements we may gloss over in a graphic novel.

Another thought-provoking novel from the author of award-winning American Born Chinese.