Each year, the Independent Booksellers select an array of Australian books for recognition. Often these books receive applause further afield, and so the shortlist proves to be a great point, for readers young and old, to select from. Previous winners include Anh Doh, Tim Winton, Richard Flanagan and Craig Silvey (with ‘Jasper Jones’ soon to be released as a movie). 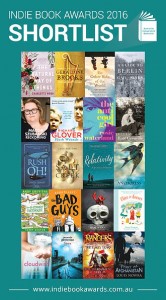 Many of the authors mentioned above would be well recognised by most readers, and our library has those marked *.

I wonder which of these titles will be awarded the top honour? Which one would you choose?

Other categories also exist at the Indie site –  for debut novels adult reads and non-fiction titles – which are also worth looking into. The Indie Book Awards category winners and the Book of the Year 2016 will be announced at an event in the Sydney CBD on Wednesday 23 March.

Have you been to see your independent bookseller to chat about these titles? Will you have read some of these titles before then? which one will you vote for?

*** Shaun Tan is always hard to beat – so different from the others in the Children’s Shortlist – maybe he’s really in a class of his own?

# Some of the local independent booksellers we rely on include: