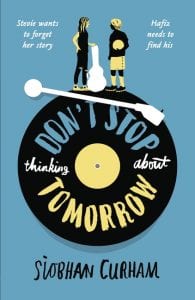 Planning events these days will involve a playlist – that is, the significant songs that can be used during the event. Special songs for the wedding couple, meaningful songs for a birthday celebration, reminiscent songs for anniversaries. The Spotify generation can relate to this – and plan their playlist.

Stevie has a playlist her father left her – to deal with different days and different times – even though he wasn’t expecting to leave her life quite so soon. Her mother certainly didn’t expect that either – and Stevie has also ‘lost’ her too since she is severely depressed and unable to cope with daily life in any form – including caring for Stevie.

In another world, Hafiz was sent from his family – forced to flee as a refugee from Syria – and to leave his parents behind. Facing life without his parents (in a strange new country, in a new school), Hafiz finds some solace in Stevie’s isolation from others, when he first sits at his allocated desk, beside her, in homeroom.

Each has their own struggles, which slowly surface as they slowly expose different parts of their life to one another. And together, they find support.

Curham’s novel Don’t Stop Thinking about Tomorrow’ blossoms from the Fleetwood Mac song – as Stevie and Hafiz deal with the usual teen issues, along with their fragmented family lives. It is told alternatively by Stevie and Hafiz, giving two sides to the story. How these unlikely friends, cautious about sharing with others, ultimately work together (without romantic involvement) is what keeps you reading, and provides lots of food for thought.

What are your takeaways from this book?

Though it is set in England, would it easily transfer to an Australian setting? 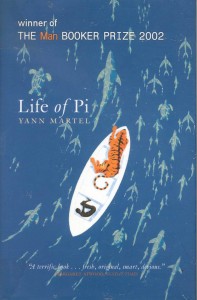 It’s been interesting getting into Life of Pi in a number of different ways, as I have read the book from both a paperback and while driving my car (obviously with an audio version…).

Life of Pi has been on my to-read bookshelf for some time and, of course, came to my attention again recently, when promotion of the movie began. By ‘reading’ using combined audio and paperback, I found an unusual richness was added to the story with the contribution of a quality audio production*.

Martel’s writing is where all the magic begins, however, as he tells the tale of a young Indian boy on his journey to manhood. Pi has struggled for many years with taunting at school, derived from his name, Piscine. In spite of this, (or because of this?) Pi is a strong willed young man with a great curiosity of life and how the world around him works.

With a somewhat unusual homelife as a zookeeper’s son (what child wouldn’t love to grow up in a zoo?), Pi has developed keen powers of observation of animals of all kinds – humans included. This awareness of animal behaviour provides a great background later in the story, when he is set adrift in a lifeboat with a menagerie of different animals. His survival skills are well and truly tested to the limit!

His questioning nature is also revealed as he digs into the 3 main religions which exist in his Indian homeland – Christianity, Hinduism and Islam. As a curious child, he seeks an understanding of the differences and similarities of these faiths, and commits to all 3 – much to the ire of each of his religious teachers!

A move by his family, away from the politics brewing in India, results in their journey on a Japanese cargo ship to Canada. Their zoo is dismantled and animals are sold afar; some of which journey on the ship with them. The tragic sinking of the cargo ship begins another section of the book, where Pi faces the many challenges of being afloat on a lifeboat with very unusual company – including Richard Parker!

Martel’s writing is memorable, poetic and so rich that it is believeable. It is a book to make you think long after you finish it. It is fantasy, but also holds many truthful observations within it, and doesn’t necessarily provide a neat ‘happy ending’. As a winner of the Man Booker Prize in 2002, Life of Pi has had many reviews over the years, and has now been made into an award winning film (which I can now see, having first read the book!)

What messages did Life of Pi relate to you? Is it a believeable tale? Or is it an abstraction from reality? An allegory about human existence perhaps?

* the Audible.com version of Life of Pi was well narrated – the Indian accent added so much to the story, and made it even more compelling to listen to Martel’s poetic tale.

You can also view the film trailer:

(I have now seen the movie, and while it was great, I do prefer the book!!)