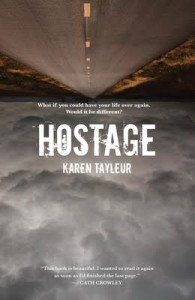 It’s Christmas time and Tully has just finished school. As an average teenager, you would think things should be good for her. Unfortunately, on Christmas Eve, she gets caught up in a hostage situation at her local chemist, and we learn a lot more about her as a result:

“I remember something cold on my neck, which could have been a knife, or it could have just been his cold long fingers pressing in to me…”

And so the tale begins, as Karen Tayleur crafts a story which gives us glimpses of Tully’s childhood past, and then intertwines this with clues of how Tully came to be in the hostage situation that Christmas Eve. Tully revisits the relationships she has had with various friends and family members, as the police ‘interview’ her back at the police station, though it more her telling her own life story as the book unfolds.

‘Hostage’ was launched at the ASLA Biennial Conference on September 30, and it was great to meet with the author, Karen Tayleur. She has created real characters, in everyday situations, some living a not-so-perfect life, well-woven together in a book of puzzles for the reader to jigsaw together.

Another interesting point is the mention of characters from her previous book, ‘Chasing Boys’. Was is just that she liked their names and characters, or do authors become attached to them, like real people? Perhaps if you read both books you could comment on this crossover, and suggest whether Karen has another book in mind? Perhaps you have suggestions for her?

Vist her website for details about her other books and an insight into the author herself. You can also read an interview with Karen at: